We drove slowly through the arched entrance towards the main building. The vines formed a tunnel creating a natural canopy that shaded us from the hot afternoon sun. The roots hung down on either side of us moving gently in the breeze. The sound of the busy main road became muffled as we neared the colonial mansion.

I would be staying one night at Tugu Hotel Blitar and already I was looking forward to it Blitar property. The luxury hotel commands a central position in the city in a refurbished mansion that dates back to the 1850’s. Even though the hotel was located just off the main road it felt like we were being transported away from the city. 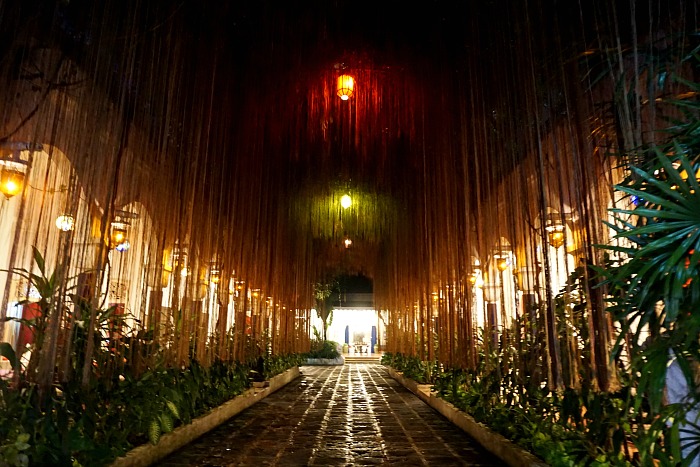 The entrance to the Tugu Hotel Blitar. You can see the colonial mansion at the end of the tunnel. 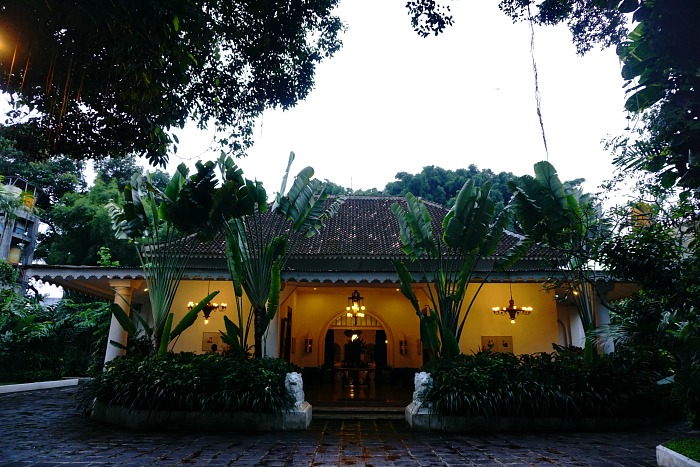 Tugu Hotel Group runs and manages four boutique hotels in Indonesia (Lombok, Bali, Malang and Blitar). The concept behind each hotel is linked to the past and the culture of the area. At Tugu Blitar the story of the hotel is entwined with the independence struggle of Indonesia. This was where Soekarno, the first President of Indonesia, and his young government laid out plans for the post-independence future of the country.

Everything has been done to restore the property to its former glory while preserving its history. The old colonial mansion, with its high ceilings, white-washed pillars, and art deco chandeliers has been carefully refurbished. Ancient trees grow in the grounds of the hotel and there is even a warung call Waroeng Jawa, where traditional Javanese snacks are served in the afternoon. 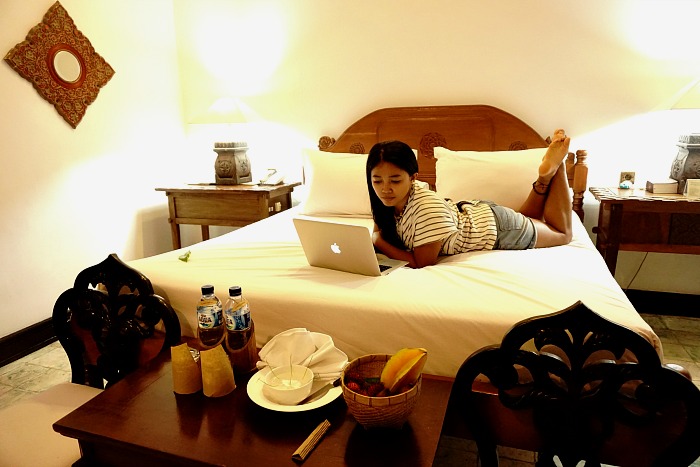 Tugu Sri Lestari has a total of 56 rooms and four different classes of rooms. The Executive Suites and Deluxe Suites are tucked away behind the main building. The rooms are outfitted and decorated in the same colonial style with Javanese influences. Each room has a double or twin single beds, colonial-era furniture, and en-suite bathroom.

There are five bedrooms and a function room in the old mansion at the center of the resort. The highlight is the Sang Fajar Suite, which was used by Soekarno. The suite has a study area to accommodate guests and the sleeping room. Old photos and memorabilia from Soekarno are tastefully placed around the living room, while the grand hand carved emperor-sized bed dominates the sleeping area. 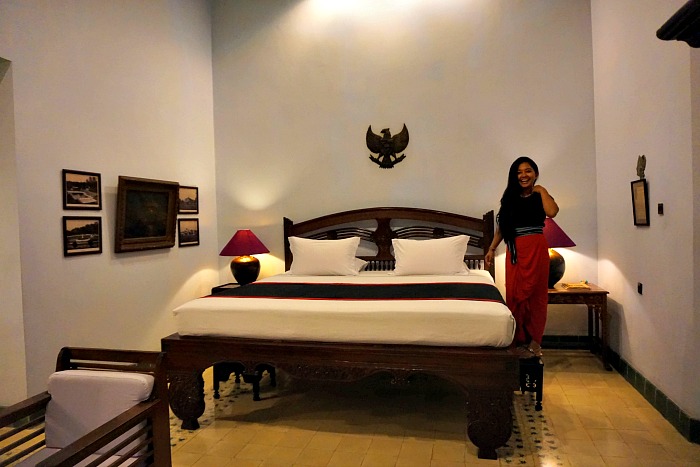 Either I am too short or this bed is too big. 🙂 Emperor-sized bed in Sang Fajar Suite 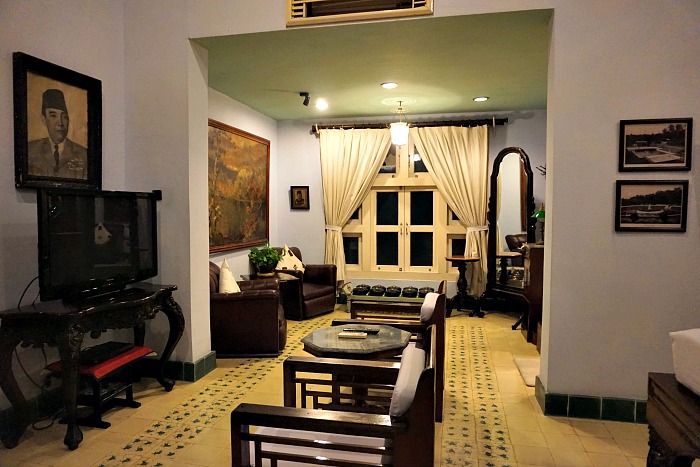 The living room of the Sang Fajar Suite

Breakfast is included with the room rates at Tugu Hotel Blitar. The restaurant, The Colony, is located at the front of the complex next to the road. It is on your left as you enter the hotel from the street. Hidden behind the curtain of vines the restaurant has an intimate feeling, which is heightened at night when soft lamplight illuminates the tables. The menu at the restaurant is extensive, affordable and varied. 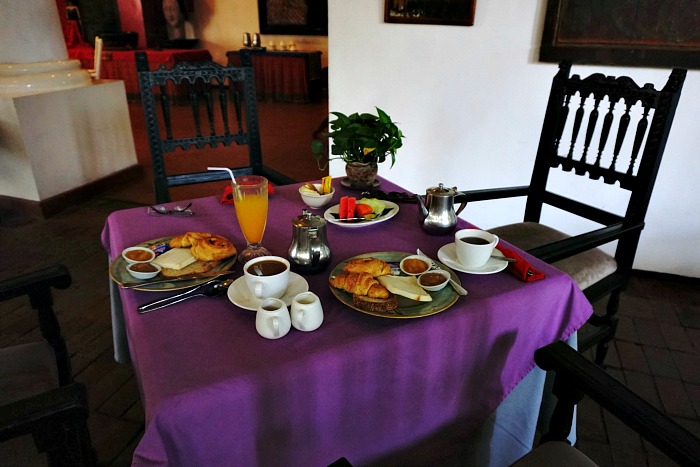 Breakfast at The Colony restaurant, which is located at the front of the hotel 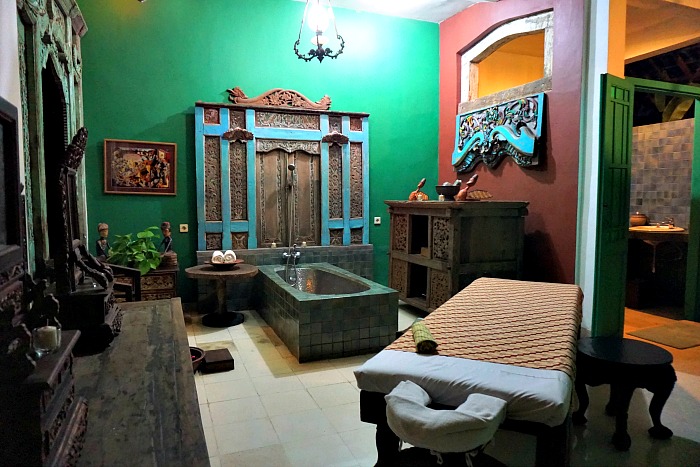 One of the treatment rooms at Lali Djiwa Heritage Spa

As you exit the back of the mansion, next to a leafy courtyard, is the Lali Djiwa Heritage Spa. There are two spa rooms. Each of the spa rooms has been tastefully decorated, which gives them a unique ambience. My favorite spa room was the one furthest away from the mansion. A large tree had been left to grow through the roof, which gave the room a special ambience.

On the right of the entrance, just as you pass reception, is the Waroeng Jawa where you can get afternoon snacks. This was one of my favorite places in the hotel. The decoration is at once simple and charming. Sitting drinking afternoon tea and eating traditional snacks reminded me that it’s the attention to details and the small touches that can make your stay at a hotel so special. 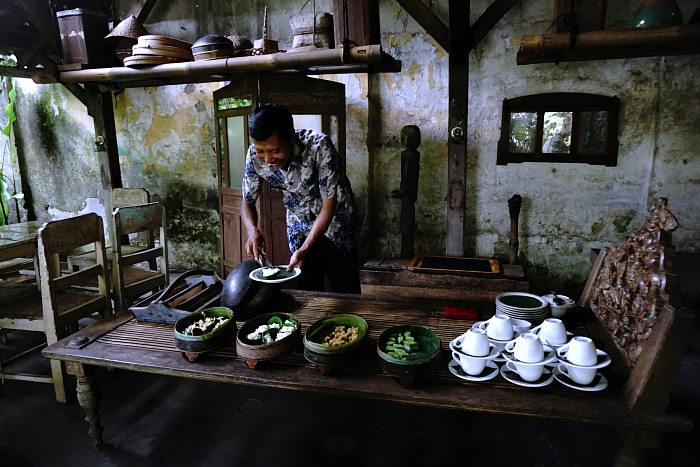 I stayed one night at Tugu Hotel Blitar. While the setting was beautiful and the room was lovely it was the staff at the hotel that made my stay special. From the moment I arrived members of staff were saying “hello Firsta” whenever they saw me. It might sound like a little thing, but having people call you by your name when they see you automatically makes a place feel more inviting and a hotel feel more like home.

Blitar is also an interesting place to visit. There is a surprising amount of things to do around the city. In many ways it reminds me of a quieter version of Yogyakarta. There are beaches, tea plantations, the volcano and the largest Hindu temple in East Java all within easy reach of the city. While less famous with international tourists, Blitar does have a large domestic market. Many Indonesian tourists come to Blitar to visit Soekarno’s family home and his mausoleum.

FYI
Discover Your Indonesia was invited to Tugu Hotel Blitar to review it, however my opinion is, as always, my own.

Next post Ramayana Ballet Prambanan: The Story of Shinta and Rama

Previous post How to Arrange Your Bromo Tour (The Complete Guide) 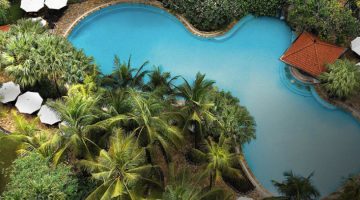 9 Exciting Things to Do in Banyuwangi for an Unforgettable Holiday 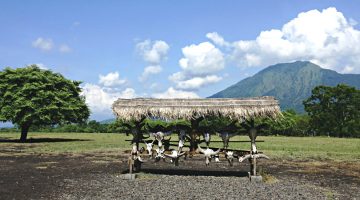 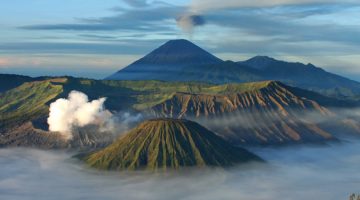