The Cheapest Way from Jakarta Airport (CGK) to City

First time to Jakarta? Wondering about Indonesia airport? No idea how to get from Jakarta airport to city without getting scammed? Don’t worry, I will explain (hopefully everything that you need to know). So before we start, you need to know that there are two airports in Jakarta; Soekarno Hatta (CGK), which was the only commercial airport and Halim Perdana Kusuma (HLP), which was an airport that doesn’t have any commercial flights, but since January 2014 it does.

If you come to Jakarta from outside Indonesia, you will arrive in Terminal 2 or 3 of Soekarno Hatta Airport (The airport’s IATA code, CGK, originates from Cengkareng, a district northwest of the city, and it is often called Cengkareng Airport by Indonesians, although the airport is administratively located within Tangerang). As many tourists use Air Asia to fly within Indonesia, there is a good chance that you will arrive in the new Terminal 3 (this is the terminal for Air Asia Indonesia domestic flights). The same is true if you fly with Garuda Indonesia, the national airline, which operates domestic and international flights out of Terminal 3. If you take an Indonesian airlines like Sriwijaya Air, Lion Air, or Xpress Air you will arrive in Terminal 1 or Terminal 2. 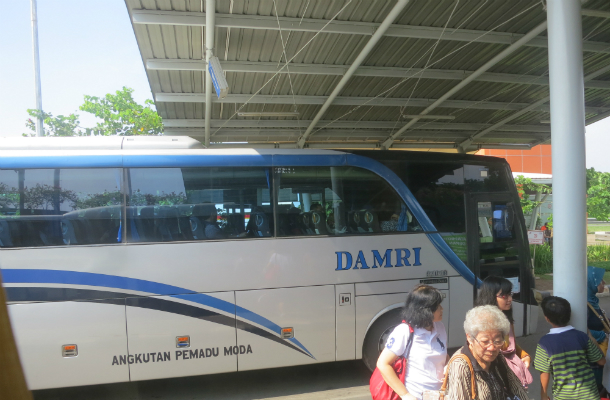 Jakarta Airport is very big, and it got a shiny new Terminal 3 in 2016, but it is nevertheless very crowded. After passing through immigration and collecting all of your luggage, you will exit the terminal. Chances are people touts will notice that you are a tourist because of your bags.

Getting from Jakarta Airport to the City

There are a lot of different ways that you can get from the airport to Jakarta. The easiest and most convenient is arranging a Jakarta car rental (which I can help arrange). There’s a full list of other transport options below.

Jakarta traffic is bad. Whatever form of transport you’re taking expect to spend time stuck in a traffic jam. My record was 3.5 hours stuck in a taxi. I expect to spend at least 90 minutes stuck in the traffic (to be safe give yourself at least 90 minutes, preferably 2 hours) for the ride from Jakarta to the airport. If you’re transiting through Jakarta or spending only one night in the city I’d recommend choosing a hotel near Jakarta Airport. The best budget hotel near Jakarta airport is Ibis Budget Jakarta. For mid-range I recommend Jakarta Airport Hotel. It was recently refurbished, such a good thing, and is at Terminal 2 (just wakeup and get on your flight). The only luxury hotel near the airport is Bandara International Hotel managed by AccorHotels. For a single traveller you should check the Digital Airport Hotel, it is located in Terminal 3 Ultimate and it is a capsule hotel. They have the option for 6 hours rental, which is a great offer for a traveller who are looking to have a sort rest before or after a flight.

One other thing… I can almost guarantee that the unofficial taxi driver or tout will say “do you want to go to Jalan Jaksa?” This is because they already have the mindset that most foreign travellers are backpackers that will be heading to Jaksa. Whatever they say, just be polite, smile a bit and ignore them. They will follow you and try their best to get you to come with them, but what ever they say, don’t trust them.

The government of Jakarta has recently completed the process of building a high speed rail link from the airport to the centre of the city. The airport train opened in December 2017 and has proved a hit with locals and tourists alike so far. The train will stop at Soekarno-Hatta, Batuceper (BPR) , Sudirman Baru/Stasiun BNI City (BNC), and Bekasi stations. Later on they probably add Duri and Manggarai. Be aware that, while trains run for most of the day, they are not 24-hour.

For a comparison, from Sudirman Baru to the airport, if you are taking a taxi, the journey will take around 1,5 hour (moderate traffic), with cost around Rp 150,000. 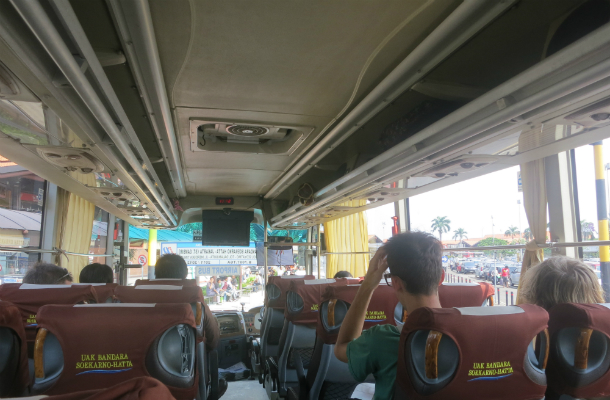 Catching a Taxi to the City

I’ll write this on the assumption that you want to go to Jaksa, which is in central Jakarta ;), which is a 90 minute journey. With this in mind, here are two options I would recommend to get from Soekarno Hatta Aiport to Jakarta. The first option is to go by taxi, which will cost you around Rp. 150,000 – Rp. 200,000 (Taxi argometer starts at Rp. 7,500). I would suggest take a Blue Bird (blue color), Express (white color), Taxiku (yellow color) or Gamya Taxi (green color), as they are the most trusted taxi companies. Everyone knows this, so you will probably have to queue. You can easily spot the taxi counter outside the airport building. By the way, if you are a group of 4, I would suggest splitting the cost of a taxi rather than taking a bus. 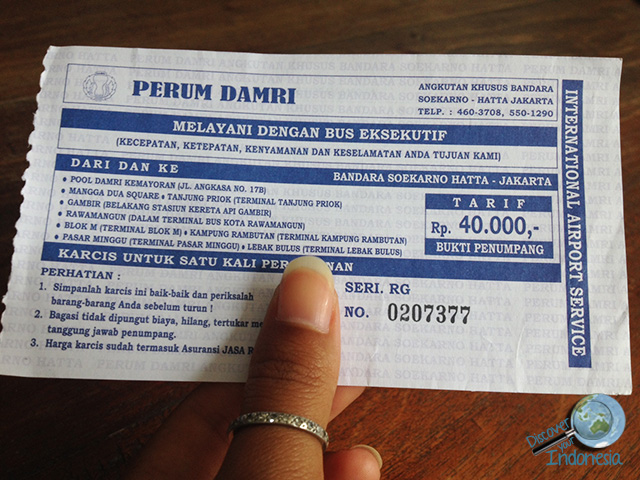 Catching a Bus to the City

The other option you have, which is the cheapest option is to use the Damri bus, which will cost Rp40,000 (please see picture at the end of the article). I think the last Damri bus to Jakarta is around 00:30 am. You want to take the one that going to Gambir (Gambir is a train station). The first bus from Gambir to the airport is at 3:00 am (3am-9pm; every 30 minutes or 1 hour). 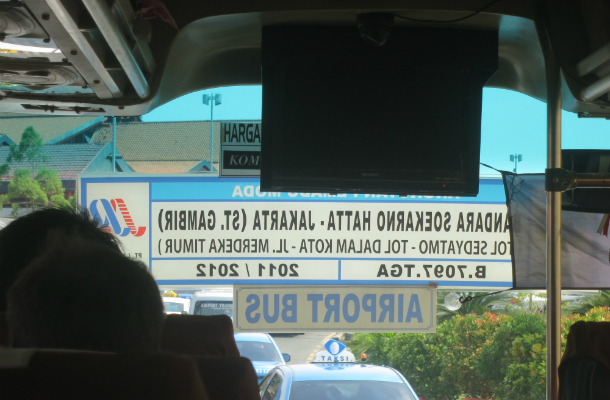 It’s easy to find the Damri ticketing station in each of the airport terminals. Simply tell them that you want a ticket to Gambir and then wait. Usually they will yell “Gambir… Gambir…” when your bus is coming, but just be sure to keep on eye on every Damri bus that comes. The sign of the destination is on the front of the bus, either on the top middle or bottom left side of the front big window. From Gambir, you can walk to Jaksa (it is not far at all!) or you can get an ojek (motorbike taxi) for $2-3.

Additional info:
– There is a shuttle bus between terminal and it is free (yellow bus)
– There is also a sky-train between terminal
– There is a luggage storage area at the airport. At terminal 3 Ultimate, it is located at the very end (from the arrival). The name is .Box and the rates is per kg: 0-10kg (small): IDR 50,000 / day. There are should also be in other terminals.

Arriving in a new city can be so stressful. I hope this guide gives you the information you needed to know to get from Jakarta Airport to the city (if I missed anything leave me a note in the comments below and I’ll update the post). There’s some more articles below about Jakarta you might find useful.

Need inspiration where to go after stopping for a while in Jakarta? Check these options:

That should keep you busy. Hope you enjoy your time in the city. And if you need more information about Indonesia just use the search box or pick the topic from the menu at the top (we’ve got hundreds of useful articles about the country). Enjoy your time in Indonesia.

If you decide to stay around the airport and need hotel recommendations, please check this article for best hotels around Jakarta’s airport.

Travelling to Jakarta? Don’t forget your travel insurance. I use World Nomad. It will cover you for injury and theft. Find out just what it covers here.

Have you ever been to Jakarta’s airport and to the city? What was your experience?

FIND OUT MORE
Tags: airport bus in jakartacheapest way to jakarta from the airportjakarta airporttransportation airport