Jakarta to Yogyakarta by Train (Without the Headache)

Jakarta to Yogyakarta by train is one of the most popular routes for tourists (or vice versa). Find out how to arrange the trip so you can see the countryside, meet new people and, well ‘travel.’ To help you arrange your trip, here’s a guide on catching a train going to Yogyakarta from Jakarta. I’ve included everything from the train itinerary, where to book a ticket and what to expect on the journey. Let’s get started!

If you’re going to take the train to Yogyakarta stay close to Gambir (not actually in Gambir, which is a boring area with little to do and nowhere to eat). With Jakarta traffic this is just more convenient. The two hotels I’d recommend within easy reach of the station are Double Tree by Hilton in Diponegoro for luxury travellers or Ibis Budget Hotel Cikini (which has a great olympic sized swimming pool where I always used to swim).

If you are catching a train you can either catch a day or a night service. I would recommend you catch the day train from Jakarta to Yogyakarta for a number of reasons. The main reason is that the views of the Javanese countryside on the day train are really spectacular. You pass through small villages, hilly countryside and lush green paddy fields. It’s really beautiful and if it’s your first time in Indonesia really interesting.

I’ve taken the night train from Jakarta to Yogyakarta a couple of times. It’s ok, but please don’t make the mistake of thinking that this is a way of saving money on a hotel. It isn’t. You arrive in Yogyakarta at around 3 am or so. You will be tired and you will want a shower. Then you have to wait till 10 am (or maybe 12 or 2 pm) to check into your hotel. It all results in a wasted day.

I recommend using the executive service if you take the night train. The seats are more comfortable than business class, something you notice when you try to go to sleep.

Trains in Indonesia are relatively cheap and are a popular form of transport for Indonesians. If you plan to travel by train you should book a train ticket from Jakarta to Yogyakarta ahead of time (this is especially important for public holidays. Indonesia has a lot of them. Check here to see when they are). Please be advised that you can book the ticket max 3 months in advance.

You can book a train ticket or make a reservation through the National Train Company’s website. The website is only available in Indonesian. Alternatively you can book a ticket through www.tiket.com or www.traveloka.com, which is also available in English (and it is easier to navigate).

Credit Card Payments: Some travellers have issues making a booking via ticket.com or traveloka.com. If you have problems you will have to go in person to an Indonesian train station to secure your ticket or try to purchase your ticket from a convenience store like Alfamart
.

Below is a step-by-step guide to purchasing a train ticket through the website of the national train company.

How to Book a Train Ticket (Kereta Api Indonesia):

1. Press here to go to the ticket booking page.
2. Fill in the information as in the image below. 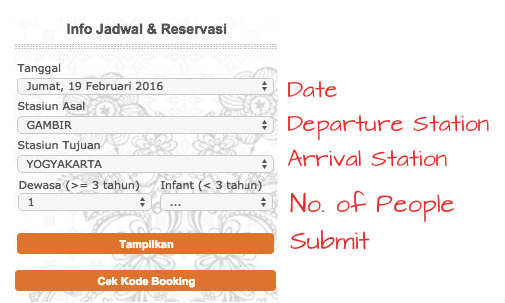 3. Select the train (see table above for train names) and press ‘book.’

6. Enter your credit card details and make the payment

Catching a Train From Gambir Station

The traffic around Senen is worse than around Gambir. The train station is also busier. Make sure to arrive at Pasar Senen 30 minutes prior to the departure time. If you have made a reservation and need to pick up your ticket arrive at least one hour before departure time. 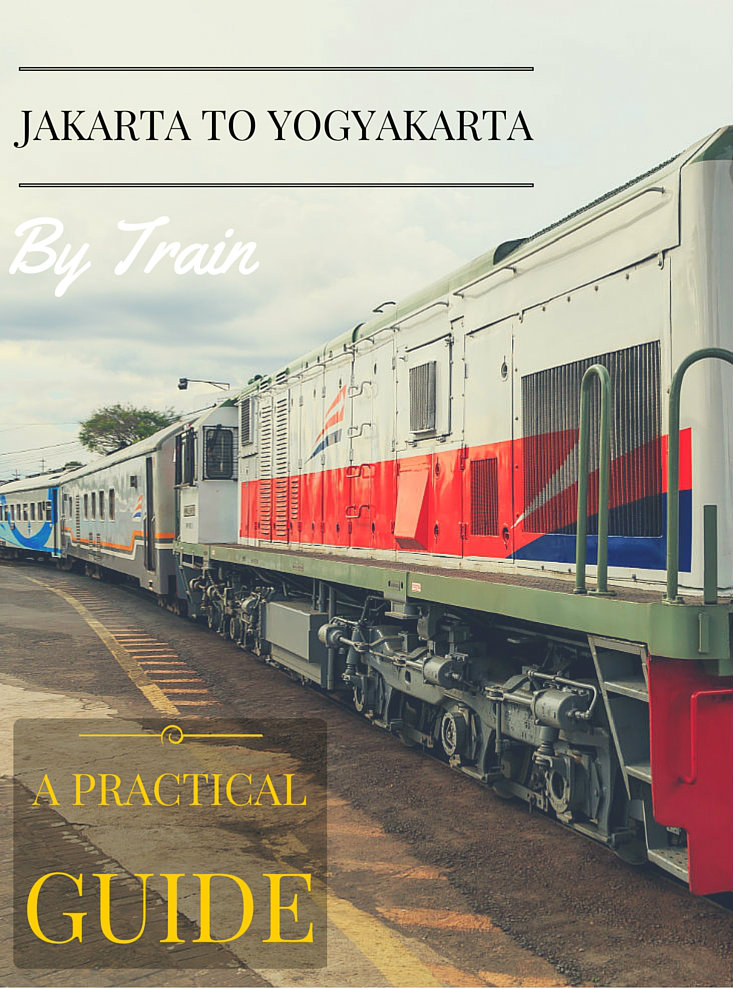 There are a few options for places to eat or drink at Gambir Train Station. You have Solaria, McDonald’s, Dunkin’ Donuts, Station Cafe, Krispy Kreme, KFC, some minimarkets and even Starbucks. While in Senen Train Station the options are limited. There are only Es Teler 77, CFC and a minimarket. You can also find ATMs, and restrooms in both stations.

The Best Hotels Around Malioboro for Any Budget

Tugu Station is the last station on the train line. This is a popular area for backpackers and there are a lot of hotels, home stays and hostels in the area. The area is always busy whatever time of day you arrive. To enter Malioboro Street walk out of the train station and turn right. Now all you need to do is find a nice place to stay.

Have you take the train from Jakarta to Yogyakarta before? What did you think about the journey? Would you do it again? Share your thoughts with other travellers in the comments below.

Previous post In the North of Bali is a Hidden Waterfall. And Yes, It's Amazing