Jakarta is one of those cities that you either love or hate. People that hate the city will say ‘don’t spend too many days here‘ or ‘just transit through Jakarta‘. People that love the city on the other hand will say ‘you have to experience Jakarta Nightlife.’ I’m going to focus on the positive! I’ve already covered the best bars in Jakarta and things to do in the city, so now it’s time to talk about the best Jakarta nightclubs. 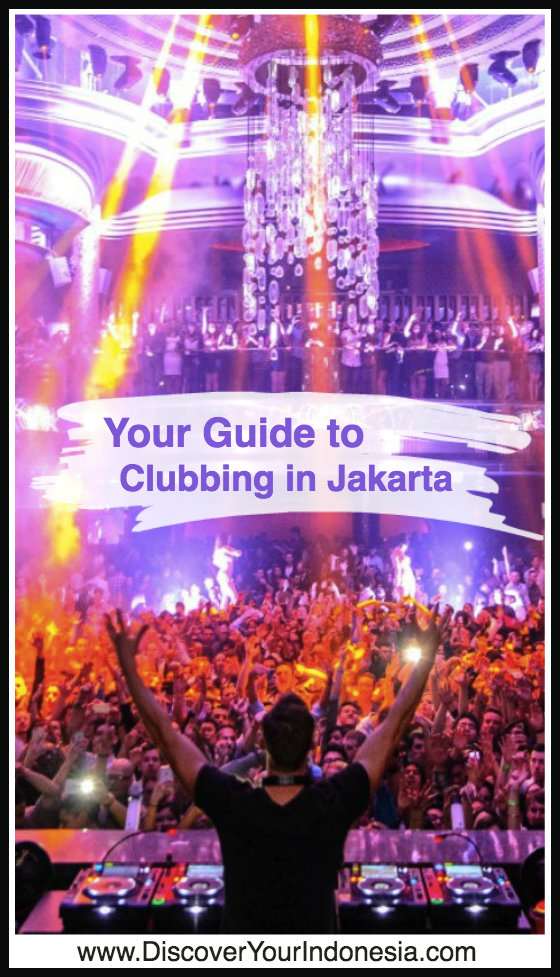 If you’re young and enjoy going out it’s true to say Jakarta nightlife has it all. You can find almost any type of music around the city and there’s something happening almost every night. Before I get into the clubbing scene though, I thought it would be good to cover some basic things about nightlife in Jakarta.

While you might think that Indonesia is a developing country, going out in Jakarta is expensive. Entrance to the good clubs will cost you between Rp 100,000 – Rp 300,000 per person. Indonesia also has a huge tax on alcohol and in the Jakarta nightclubs those fees are pushed onto you. Drinks cost between Rp 100,000 to Rp 200,000. If you’re a big drinker these fees quickly stack up.

A lot of the nightclubs in Jakarta have a strict dress code. If you’re a guy you’ll need to dress up in smart shoes and a shirt. Us girls need to wear high heels and a dress (which can be a bit of a drag when it comes to dancing). Bouncers enforce the rules so come prepared. If you’re lucky enough to look young, or you are young, carry some ID just in case.

One thing to keep in mind about Jakarta nightlife is that Indonesian’s are big smokers. Cigarettes are stupidly cheap and every other guy smokes (it’s almost like you need to smoke to graduate school). Halfway through an evening most Jakarta Nightclubs feel like they’re running a full time smoke machine. Your eyes will start to sting and you’ll leave the club smelling like the days traffic.

And a final thing… Indonesia has strict laws against illegal substance use. Tough mandatory prison sentences are imposed on anyone caught breaking the law (think 5 years in prison tough). So while popping a pill might sound like a fun thing to do on your night out, remember what Mr Mackey from South Park has to say; “Drugs are bad!“

So now that we’ve got that covered, here’s a breakdown of the best Jakarta Nightclubs. The list is in no particular order. 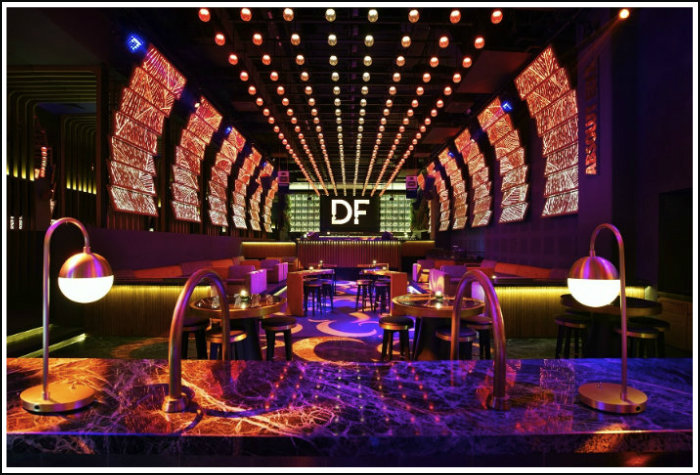 For the last few years Dragonfly has consistently been one of the best nightclubs in Jakarta. The music is good (normally a mix of RnB, electro and house music), the interior decor is amazing and it’s always busy with a fun crowd. There’s a strict dress code on the door. Make sure to bring plenty of money with you. Entrance is Rp 200,000 per person and drinks are expensive.

It’s easy to fit Dragonfly into your night out. The club is in Semanggi (here’s the location on Google Maps). There are plenty of great bars nearby. I’d recommend checking out Baxtersmith Dining and Roofbar and 3rd Avenue. They’re a nice place to start the night. My favourite hotels close to the area are Hotel Ayaka Suites (budget), Hotel Avissa Suites (mid range) or Ritz Carlton Pacific Place (luxury). 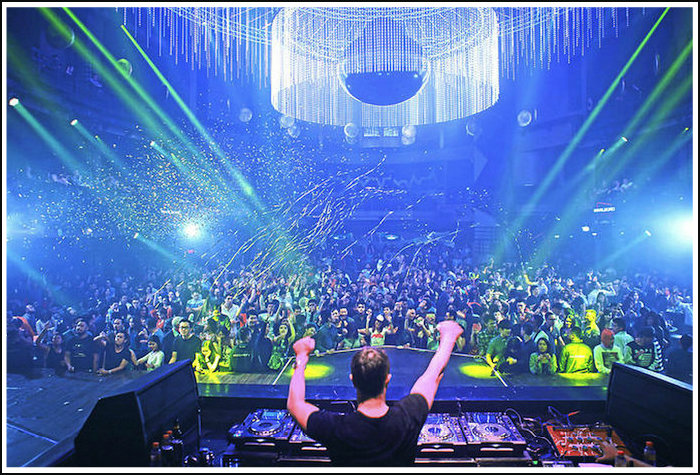 Colosseum is one of the few super clubs in Jakarta. The setting is amazing with the dance floor in the middle of a multi-story auditorium with balconies overlooking the stage. A lot of thought and money has been spent on the lighting and sound system. The club has good lineups with international DJ’s playing popular tracks. The crowd is eclectic and you get a free drink with your Rp 200,000 entrance.

The club is a bit out of the city centre in Taman Sari close to the port (here’s the location on Google Maps). A cab to the city centre won’t take long at 3 in the morning, but you’re almost bound to get stuck in traffic on the way. If you’re looking for a hotel close by then Novotel Gajah Mada is a good choice. 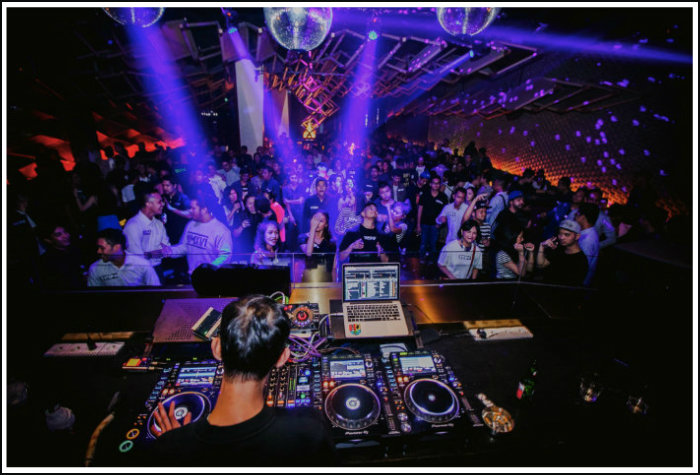 Jenja is one of the most popular Jakarta nightclub. It’s also part of a growing trend of successful nightclubs in Bali opening up sister sites in the capital. The setting is nice with a large dance floor. DJ’s play non-commercial techno and the club attracts a nice mixed crowd of students, expats and the rest. It’s the kind of place you go to enjoy the music rather than hookup.

Unfortunately Jenja is a bit out of the way. It’s in Cilandak, which is in the South of Jakarta (here’s the location on Google Maps). If you’re looking for a place to stay nearby I’d recommend Mercure Jakarta Simaputang. Alternatively just taking a taxi back to the city centre in the early hours of the morning (it’s a 30 minute ride to the city centre). 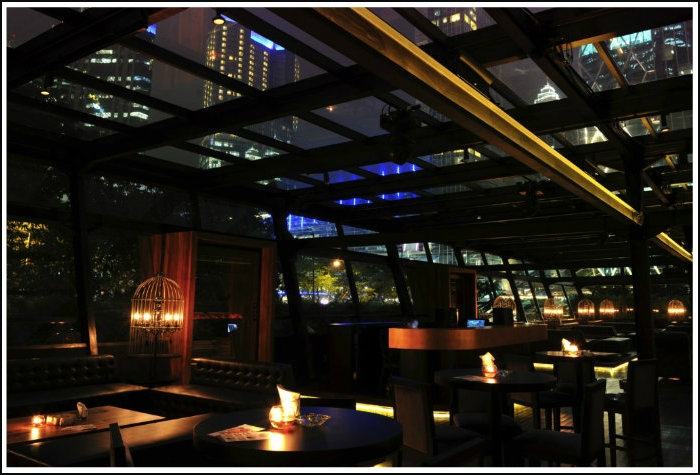 Fable is in the SCBD, the city’s financial district (here’s the location on Google Maps). The club attracts a young and rich crowd (most guests are between 18-22). The music is a mixture of hip hop and RnB. It’s got a good atmosphere and busy from Thursday till the end of the weekend. The setting is elegant and entrance costs Rp 150,000. Of course there’s a dress code.

There are plenty of nice places to go before you hit Fable. Top of the list is Lucy in the Sky, which is one of the best bars in Jakarta with amazing views over the city. If you’re on a tighter budget I’d recommend hitting the bars on Wahid Hashim, like Melly’s, where drinks are cheaper before finishing the night at Fable. 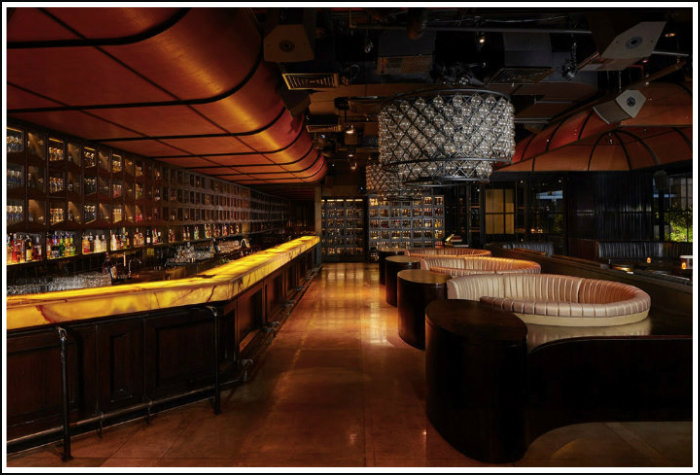 If you want to hookup check out Immigrant. The setting is trendy, the crowd is a friendly mix of young Indonesians and expats and the dance floor is small. Depending on the night music is a mix of Top 40 style tunes, RnB and chart style hip hop. Drinks are quite expensive. The cover charge to enter Immigrant includes a complimentary drink. I’d recommend hitting the club no earlier than 11. You’ll need to dress smart to enter.

Immigrant is right in the heart of Jakarta’s business district surrounded by 5-star hotels (here’s the location on Google Maps). There are lots of nice bars nearby where you can start the night. I’d recommend checking out Skye Bar, which is on the 56th floor of the BCA Building. On the other side of Bundaran HI roundabout you’ll find a nice bar, which is usually busy with a mix of Embassy folks and bankers. 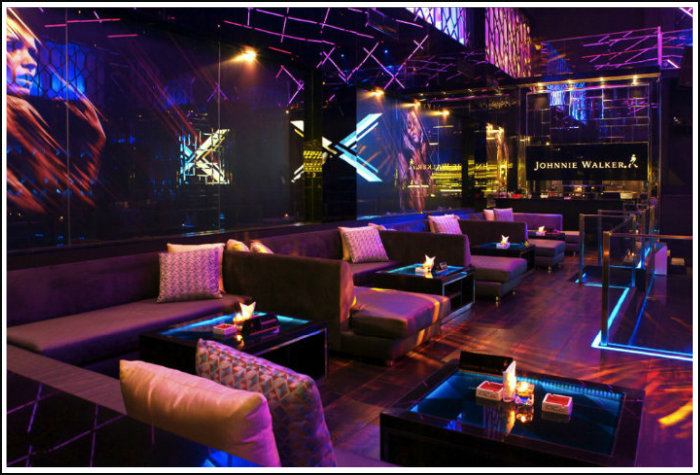 X2 is the second club on this list in upscale SCBD. This Jakarta nightclub is split over the fourth and fifth stories of Plaza Senayan. There are four sections to the club each with its own theme and style of music. On the upper level the dance floor rocks to the sound of hi hop and RnB. On the ground floor you can choose between trance and house music. Here’s the location on Google Maps. 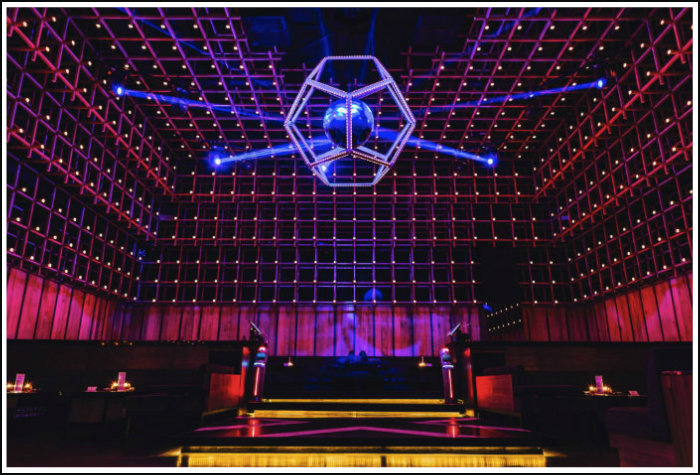 Blowfish is run by the same entertainment company who manage Dragonfly. The interior design is modern minimalist with that Ikea or Apple type of finish where less is supposed to be more and unusual means classy. The music is a mix of classic disco, which fits with the vibe, and RnB. It’s the kind of place where people come to be scene and the crowd is a mix of young professionals and socialites.

The club is in the exclusive City Plaza in South Jakarta (here’s the location on Google Maps). It’s a nice area to be based, though it’s a bit far from the tourist attractions. That said there are some good places to eat and drink nearby. If you plan to stay in Gatot Subroto check out Fave Hotel (mid range) and Crowne Plaze Hotel. 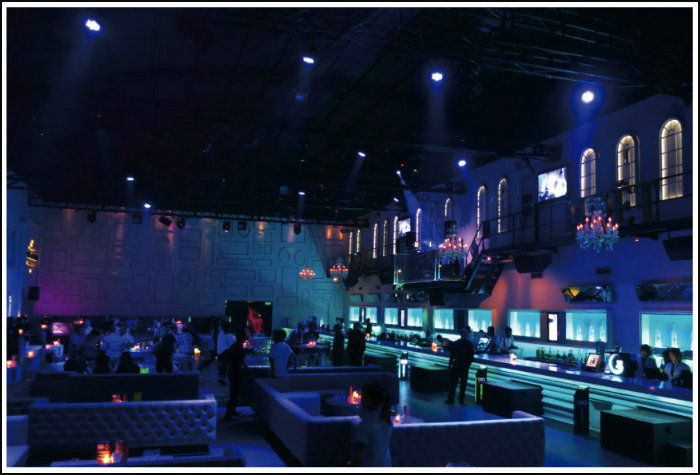 Empirica is based in the Jakarta financial district (here’s the location on Google Maps). As you’d expect the club is aimed at young professionals. There’s only a small dance floor. Most of the interior is split neatly furnished sections with white leather sofas and and square tables. At 38 meters long it supposedly also has the longest bar in Asia. The crowds normally a mix of young Indo-Chinese and socialites. Music is a mix of electro and house. 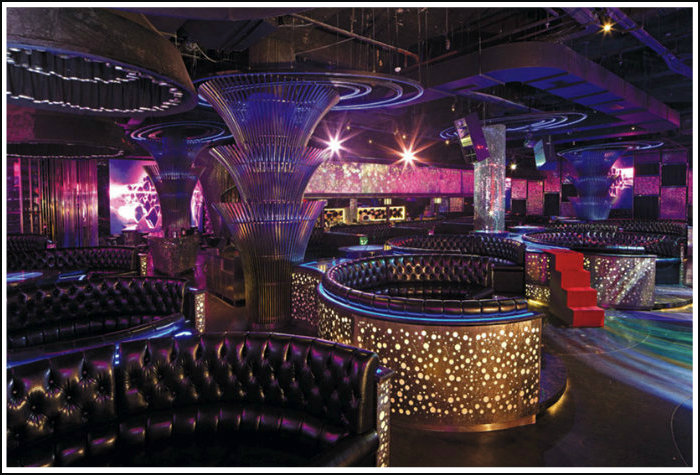 Exodus is a multi storey Jakarta nightclub based in the Mega Kuningan City Mall in the city’s business district (here’s the location on Google Maps). On the fifth floor, which is the ground floor, is the main dance floor. The music is a mix of deep house and RnB. There’s a restaurant on the second floor with a live DJ. The music here is a mellow mix of chill out and soul. On the top floor there’s a bar that serves Asian food. 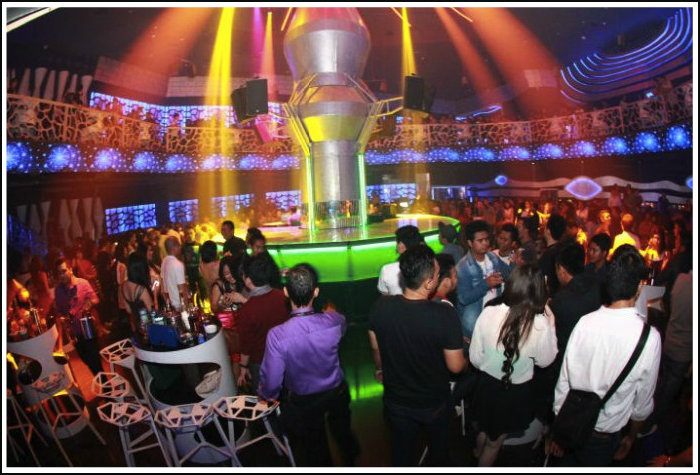 Nebula is another one of those up market dining and dance venues. The interior is futuristic retro space age. In the middle of the club there’s a huge replica of the Apollo 13 satellite, which makes for a strange centrepiece. The bar serves a mix of dessert style ladies cocktails, which are pretty delicious. I’d recommend visiting Nebula before you hit a bigger club than making it the final destination of the evening. 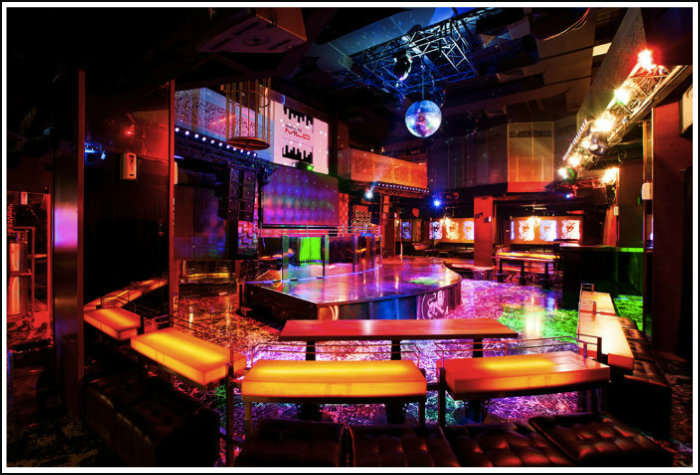 Illigals is a large club and entertainment venue in the North of Jakarta. It’s got the same kind of crowd and many of the same DJ’s that used to go to Stadium. It’s got a seedy atmosphere and a reputation for drugs. The music is a mix of dance (house, trance and techno). Make sure to check out the lineup before you visit. You can find the location here on Google Maps.

I hope you’ve found a Jakarta nightclub that interests you on this list. As you can see you’ve got plenty of choice in Jakarta for nightlife. If you make the most of it when you’re in the city I’m sure you’ll leave with plenty of happy memories. In case you need anything else, you can find more information about the city in our Jakarta guide.

Have you ever experienced Jakarta nightlife? What was your favourite Jakarta nightclub? Share your thoughts with other travellers in the comments below.

Previous post Interview with Asri Zefanya: The Secret Life of an Au pair

Things to Do in Lasem: Batik, Latoh, and Everything in Between 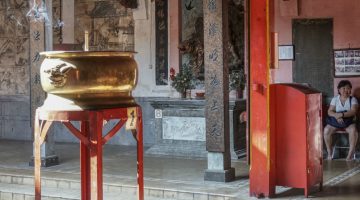 Where to Stay in Bandung: Boutique Hotel Recommendations 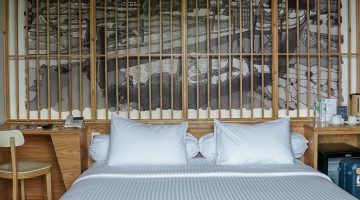