Flores Overland: A Quick Overview of The Island

The island of Flores has so much to offer visitors that you can’t just visit one destination. It’s easy to get to and has good infrastructure, so is easy to cross overland. Flores is home to two of East Nusa Tenggara’s main attractions: Komodo National Park and Kelimutu Lake. It’s easy to link these sights up in an overland tour by bus, car or motorbike.

Flores is an interesting island for various reasons. For one thing, it is the only major island in Indonesia where Roman Catholicism is the predominant religion. A clue to this can be found in the island’s name. ‘Flores’ is Portuguese for ‘flowers’, and was named by Portuguese colonialists who settled on the island in the 16th century. 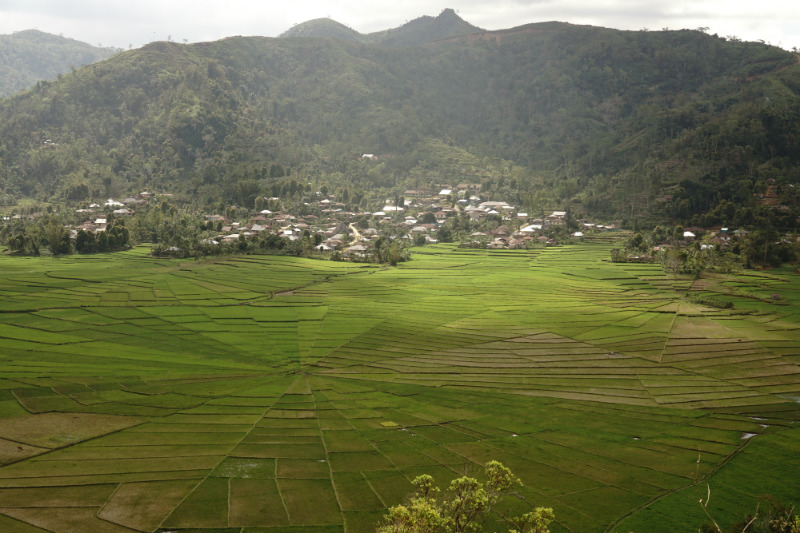 It’s easy to get to Flores from other parts of Indonesia either by boat or by plane. The main port of entry either way is Labuan Bajo, a charming town on the western coast. This is the jumping-off point for adventures in Komodo National Park. The chance to see Komodo dragons in the wild here is a highlight of any trip to Indonesia.

Labuan Bajo is a fantastic destination in various ways. Komodo National Park means the town gets a lot of tourists, and therefore a variety of hotels and restaurants have cropped up in the town. In fact, Labuan Bajo has a fantastic range of tourist amenities for a town of its size. This is the first and last place that you will find on Flores like this. Make the most of it! Stay in a nice hotel if you can afford it, and treat yourself to some good food. Jl. Soekarno Hatta, the main strip, is lined with great restaurants, from grilled seafood to pizza. 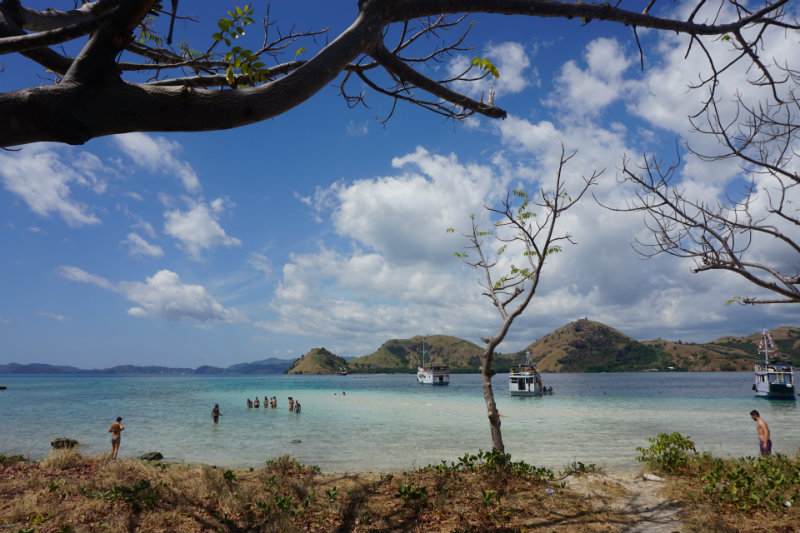 Getting to Labuan Bajo by boat

It’s easy to get to Labuan Bajo by boat from other main ports in Indonesia. These include regular ferries to and from Makassar on Sulawesi, Sape on Sumbawa and Benoa on Bali. As ever, though, schedules change regularly, so it’s a good idea to check. Schedules can be found at Pelni / ASDP. The harbour sits at the northern end of Jl. Soekarno Hatta, Labuan Bajo’s main road.

Another popular choice for many travellers is to get the ferry/boat from Lombok. These trips vary hugely in terms of comfort and safety. They will normally last for 3-4 days, depart from Senggigi in Lombok, and stop off at Moyo Island off Sumbawa. Often they will then include snorkelling trips and visits to Komodo and/or Rinca (see below). Make sure you go with an operator with a good reputation. A couple of recommended ones are Kencana Adventure and Perama Tour.

Getting to Labuan Bajo by plane

Labuan Bajo’s Komodo Airport has an ever-increasing programme of flights to other parts of Indonesia. These include Bali, Ende and Jakarta. The airport is around two kilometres outside the centre of town.

A new terminal opened in late 2015, expanding the services of Komodo Airport. It’s a quick and easy way to get to Labuan Bajo, but of course, it can be more expensive than travelling by other means. Make sure also that you fly with a reputable air line (Garuda Indonesia is definitely one of the best airlines).

What to do in Labuan Bajo

The undoubted highlight of a stay in Labuan Bajo is a trip to Komodo National Park. Here you can see the world’s largest lizard, the Komodo dragon, in its natural habitat. There are many tour operators lining Jl. Soekarno Hatta which offer trips to Komodo Island and Rinca Island. These usually combine island visits with snorkelling stops. Day trips cost start from Rp 500,000 per person.

Most visitors will take a day-trip from Labuan Bajo to either Komodo Island or Rinca Island, or both. You can spot dragons on both these islands; local wisdom has it that the dragons are bigger on Komodo, but are easier to spot on Rinca. That’s because Rinca is drier and there’s less undergrowth for the dragons to hide in. Trips will also often stop to hike the beautiful Padar Island. Komodo Island is also home to a pink beach, one of only seven in the world. White sand mixes with red coral to give the beach its unique colour. Trips also often stop here – a great place to get an Instagram picture and snorkel!

Where to stay in Labuan Bajo

Labuan Bajo offers the greatest variety of accommodation options in Flores. It’s a good idea to stay somewhere nice here if you can afford it, as you may struggle to find creature comforts elsewhere on Flores! A list of the best places to stay in Labuan Bajo can be found here.

The next stop on your overland tour of Flores will be Ruteng, a market town up in the hills set in rice paddies. Several buses a day travel between Labuan Bajo and Ruteng, taking around 5 hours. The altitude here makes it cooler than Labuan Bajo, so make sure you bring a jumper. There is a decent selection of hotels to choose from in Ruteng. Check out the Spring Hill Hotel Ruteng, or Homestay Mbeliling.

There’s not much to do in Ruteng, but the countryside around the town has some interesting traditional houses and spider web-like rice fields. Cancar is one place nearby where these unique formations can be seen.

On the way to Ruteng, you could make a detour to Waerebo. Enjoy the view of Mules island and stay overnight in Dintor, at the Waerebo Lodge. This will allow you to visit Waerebo Village, a traditional home of the Manggarai people, home to distinctive thatched buildings. 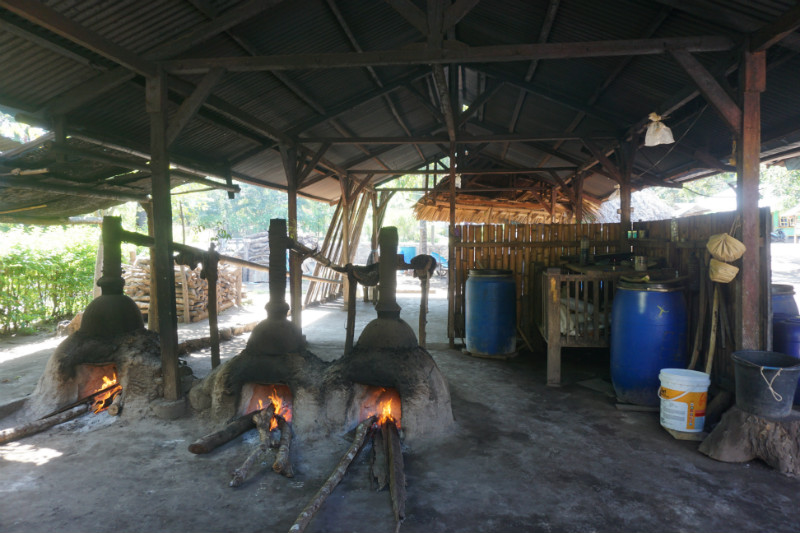 Traditional liquor in the making.

The next stop on your Flores overland adventure will be Bajawa, a pleasant hill town popular with tourists. The bus from Ruteng takes around 5 hours. Nearby Gunung Inerie is an active volcano which makes for a popular hike. A guide to climbing Inerie can be found here.

The area is also surrounded by traditional Ngada villages such as Wogo Baru and Wogo Lamu, and Bena village. Ngada villages are notable for their architecture, with villages built around traditional stone megaliths and wooden totems. Many of these are built around tree trunks and resemble people wearing traditional dress. Tours of the villages can be easily arranged from Bajawa. A one-day tour on the back of an ojek costs around Rp 150,000 per day, plus donations for the villages. The hot springs (hot and cold river) at Soa are a great place to relax and have a dip.

Where to stay in Bajawa

Bajawa has a reasonably good selection of hotels, although none of them are luxurious and most are overpriced. Try the Hotel Edelweiss or the Manulalu Bed and Breakfast. 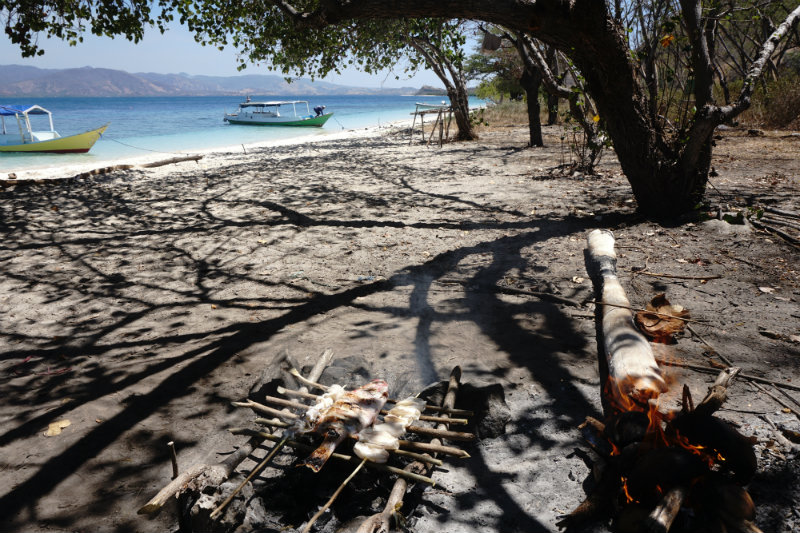 Lunch by the beach during the day trip in Riung

At this point in your itinerary, you could also incorporate a trip to the north of Flores to the town of Riung. This fishing village is famous for 17 offshore islands, which comprise a national park. These islands are great for snorkelling, beach lounging, and boat trips to the mangrove swamps to see the bats.

Riung’s islands are home to around 27 species of coral, while on land animals include Timor deer, hedgehogs, monkeys and monitor lizards. Some say there is even a species of Komodo dragon that lives here, but this is unconfirmed. There’s nowhere to stay on the islands themselves but a couple of guesthouses in Riung village. The bus from Bajawa to Riung leaves at noon and takes around 4–5 hours. 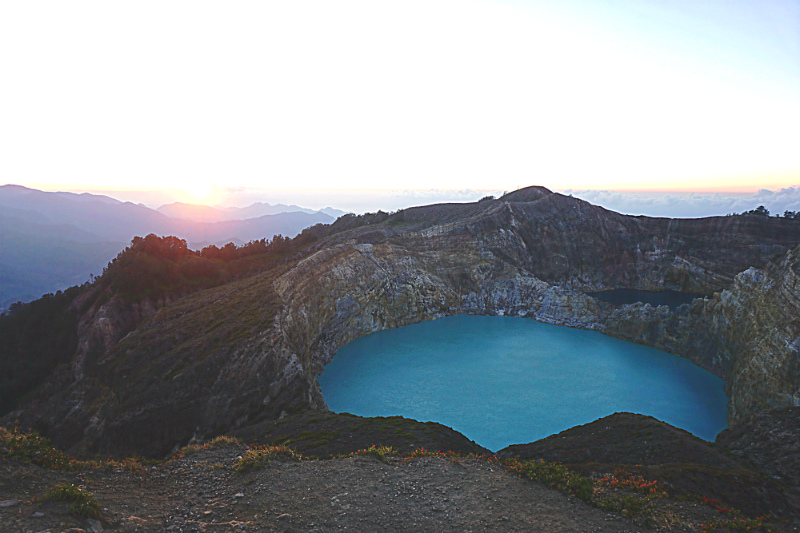 Next up is another Flores highlight: the coloured lakes of Kelimutu. This active volcano is near the village of Moni, where you’ll spend the night. A good choice is Kelimutu Eco Lodge. They will organise sunrise trips to the summit of Kelimutu. This is a beautiful experience, as the rising sun casts the crater lakes in different colours. The colours change in colours throughout the year, from red to bright blue and deep black. Local legend says that the different coloured lakes harbour the souls of different people who have passed on.

Kelimutu is definitely a highlight of a trip to Flores, along with Komodo National Park. It’s certainly worth the early start! Normally an ojek driver will pick you up at around 4am. You’ll then begin the ascent to Kelimutu, getting there in time for sunrise. There are lots of coffee sellers waiting at the top to perk you up with a hot drink. After that, it’s up to you. You can either ask your ojek driver to wait and take you back to Moni, or you can hike down yourself. This takes around 2.5 hours and is a lovely walk, with great views all the way to the sea. 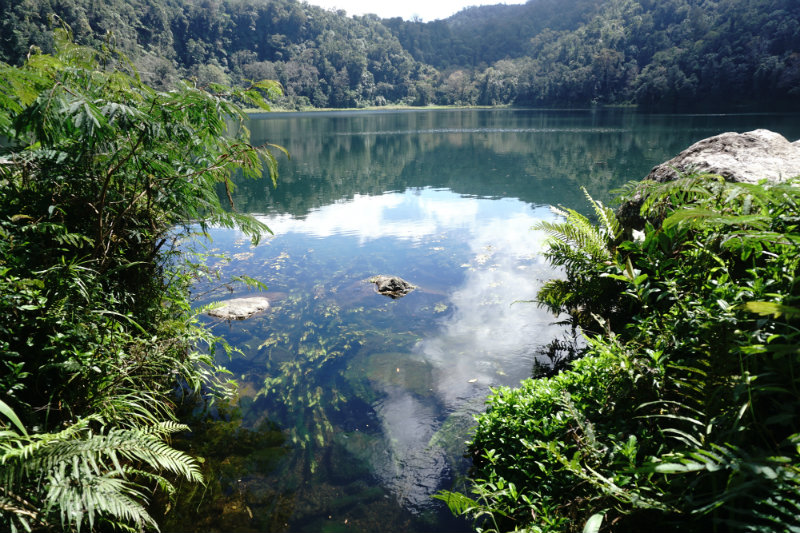 Lake that you can visit during the overland trip 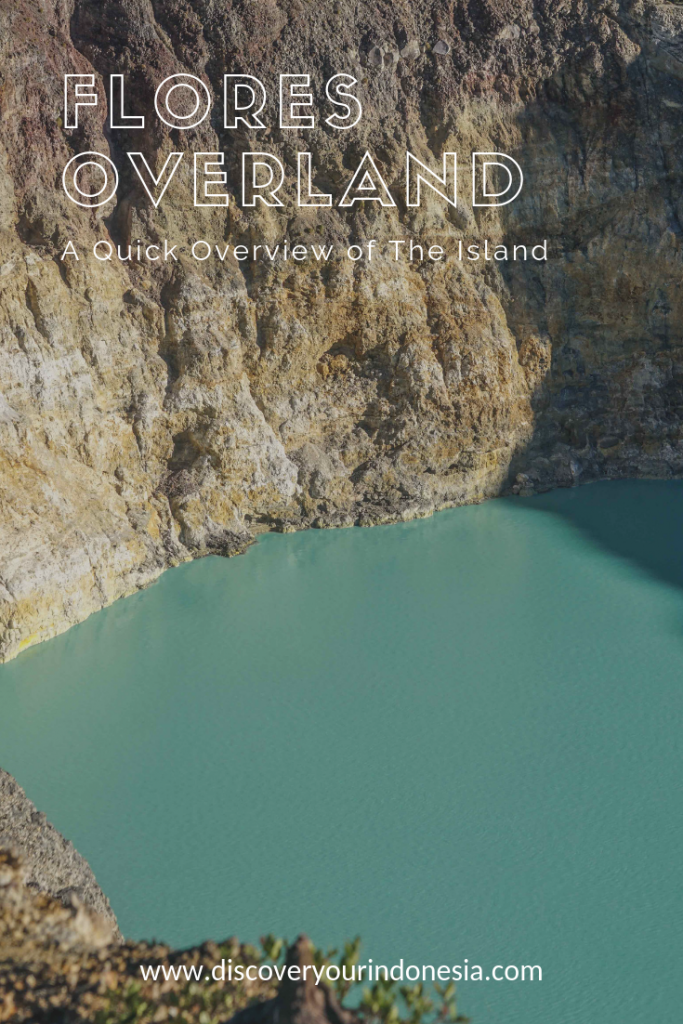 From Moni, you have two options for where to finish your tour: either go southwest to Ende, or northeast to Maumere. Ende is around 2 hours away by bus, and Maumere is around 3 hours 30 minutes away. Both are large towns with decent tourist facilities, but not a huge amount to do. However, they are good points from which to travel onward to other parts of Indonesia. In Ende, the Grand Wisata Hotel is a good option. There’s not much to do in Ende, but the area around the town is home to some great ikat-weaving villages. Ngella is one famous example, around 30 km outside of town.

In Maumere, try the lovely Coconut Garden Beach Resort or CAPA Resort Maumere. Again, there is not a great deal to do in Maumere, but it has some good beaches where you can relax. It was once Flores’ main tourism town, but a huge earthquake devastated the area in 1992, destroying lots of coral.

Have you ever done an overland trip in Flores? What was the highlights of your trip? Have you got any tips to share?

Next post Kopi Joss Yogyakarta: Not Your Usual Coffee 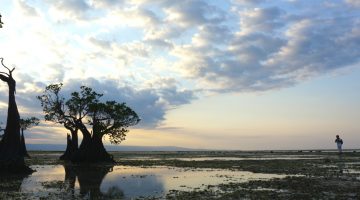 Climbing Inerie in Flores: Should You Go? 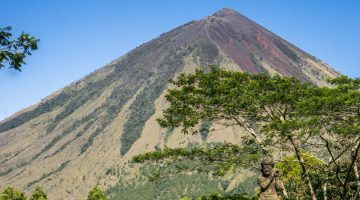 The Baliem Valley: Trekking in the Wilds of Papua 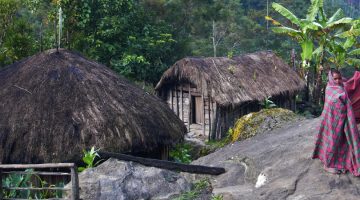