Named as one of the Seven Natural Wonders of the World, the Komodo Islands is an international tourist attraction. Few places in Indonesia offer this unique combination of beautiful natural scenery and distinctive environment. Yet it is just one of the many amazing things to do in Flores.

To help you make the most of the fascinating island we listed the 16 best things to do in Flores. The list starts with the highlights that shouldn’t be missed. At the end of the list there are some more unusual choices of  things to do in Flores that you might not have heard about before. Let’s get started!

5 Essential Things to do in Flores 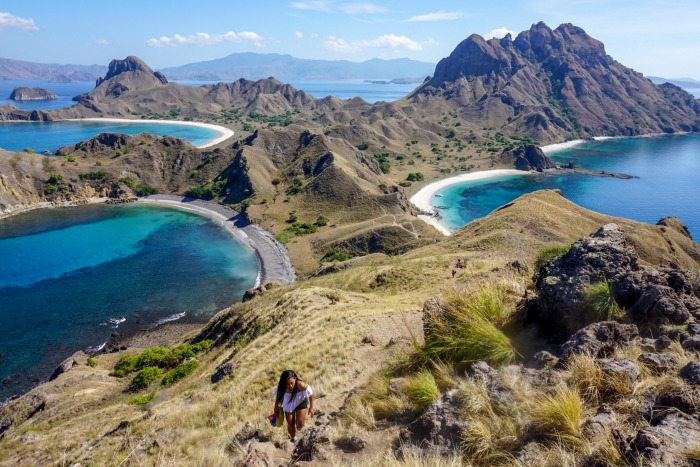 Viewpoint of Padar Island overlooking the three beaches, one black, one white and the third pink.

1. Take a Trek on Padar Island

While the Komodo Island might be the most famous, Padar Island that steals the hearts of all who visit it. You just need to look at the view to understand why the island has become such a popular tourist destination. From the top of the hill you can see the three different colored beaches of the island, one black, one white and the last pink, set against an endless expanse of ocean. You can visit Padar Island on a day trip from Labuan Bajo. For the best experience join a sunrise tour. Not only will you catch the sunrise, but it’s also a little cooler on the walk up to the peak (there is no shade and it’s super hot in the middle of the day). 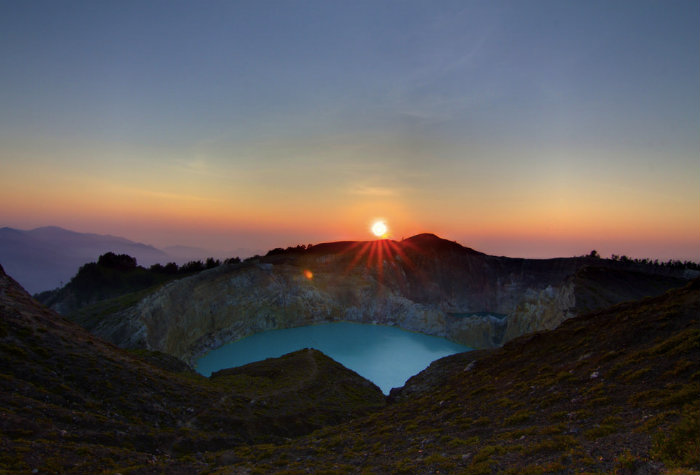 The turquoise lake at Kelimutu as the sun rises. The other lakes are red and black.

Located in the misty peaks of central Flores are the three Tri Colored Lakes of Kelimutu. The three lakes, located a stones throw from each other, are all a different color. The color changes in the sunlight. Normally the lakes are red, white and blue, but if you want to see the full range of colors you should visit at sunrise like I did. It’s best to visit Kelimutu Lake in the dry season between June and August. 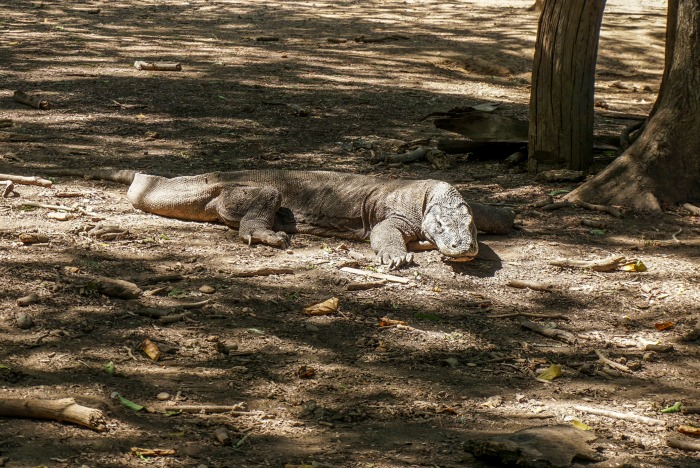 Komodo Dragon resting in the shade in the heat of the afternoon.

The Komodo Dragon is one of the 5 Natural Wonders of the World. I personally think they are a bit over rated as they are really just large Monitor Lizards, but as you probably came to Flores to see the Dragons’ then they need tone on the top of this list. There are two main islands where you can see the Komodo Dragons, Komodo Island and Rinca Island. It’s easier to see the Komodo Dragons on Rinca Island than Komodo (because they feed the dragons by the kitchen), but the trekking is actually better on Komodo Island. 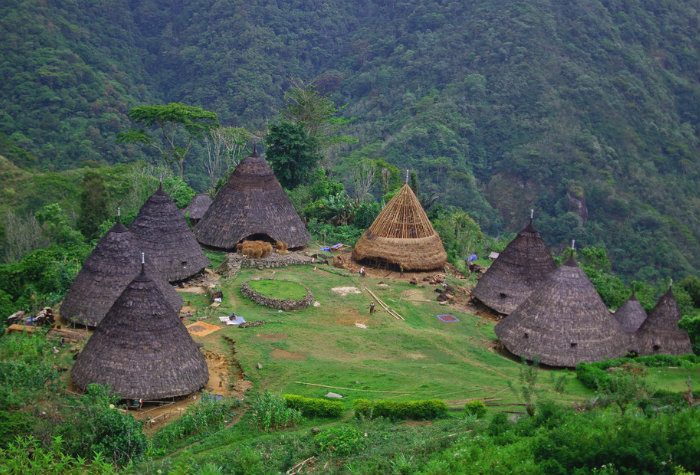 Wae Rebo, a traditional village in the highlands of Flores. The village is famous for its circular houses.

Wae Rebo, located in the central highlands, is another of the best things to do in Flores. While you get a lot of “Traditional Villages” in Indonesia Wae Rebo is one of the best. The village is set in a valley between rolling hills and it’s picturesque. To reach the village you need to hike for four-hours. This makes it harder to get to and less commercialised. If you want to visit Wae Rebo you will need to do an overnight tour. Make sure to bring a change of clothes’ as you will be staying overnight under a sky lit up stars. 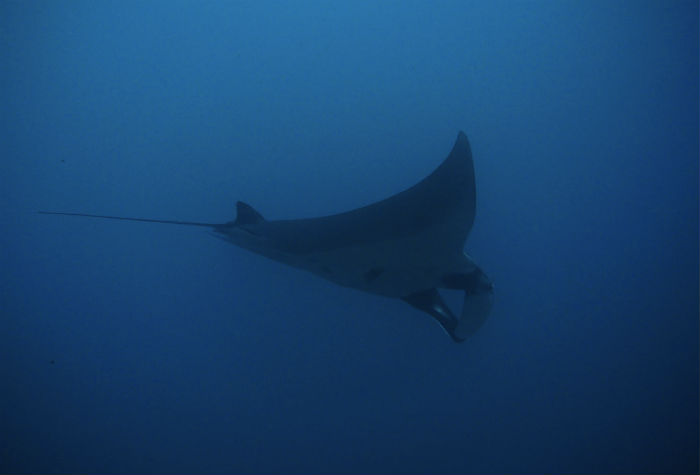 The cold current rich in nutrients attracts Manta Rays If you are lucky you can see 15 or more on a dive.

5. Dive with Rays at Manta Point

Flores is famous for its diving. One of the best dive sites around the Komodo National Park is Manta Point. This dive site is in a channel between two islands. The fast flowing current is rich in nutrients, which is what attracts the manta rays and other marine life. If you like diving you need to try this site. A dive here offers you the chance to see schools of Manta Rays drifting slowly through the water between turtles and other sea life. Manta Point really is one of the best things to do in Flores.

Additional Ideas for Things to do in Flores

Disclaimer: I know this is going to be a controversial choice, but you can’t talk about things to see in Flores without including the Lembata Islands. The Portuguese were the first to document the ancient practice of Sperm Whale hunting around the Lembata Island in 1643. The practice hasn’t changed much since that time. Every year people from the village of Lamalera go out on the sea in flimsy wooden boats to hunt sperm whales. A single fisherman stands on the edge of a ladder attached to the boat. When a sperm whale is spotted the fisherman launches himself from the boat with a harpoon. Above is a clip from the 2013 BBC documentary Human Planet.

7: Hike and Swim Around Gili Laba

Padar Island offers the best views of the Komodo National Park, but Gili Laba comes a very close second. A tour of Gili Laba starts with a 30-45 minute hike to the viewpoint. From Gili Laba Viewpoint you have panoramic views over rolling brown hills, a crescent shaped pink beach and the dark blue Flores Sea that stretches to the horizon. Gili Laba is a popular stop over point on the Lombok to Flores cruise. 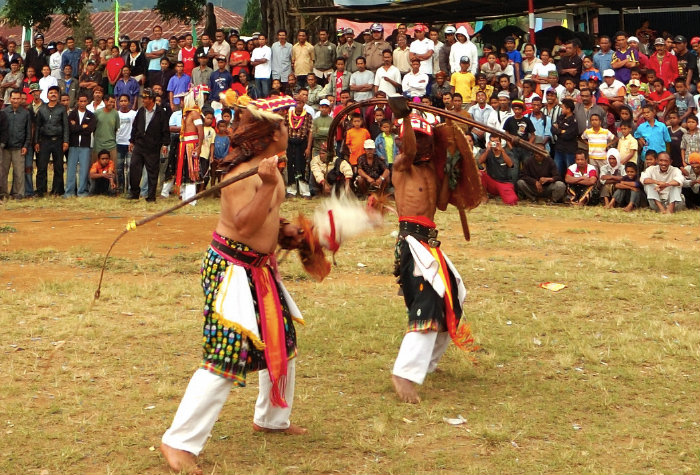 Traditional Caci fighting in Flores. The attacker has a whip and the depender holds a wooden pole and shield.

Caci is a ceremonial form of fighting, with a whip, between people of the Manggarai tribe. The fights are held between young males of competing villages. Over four rounds the competitors take it in turns to attack each other. The defender has a wooden ratten shield and stick while the attacker wields a long whip. The winner is the person who manages to hit the other player the most times. If you have a chance it’s interesting to watch a Caci fight, but I wouldn’t go too far out of your way to see one.

Cancar is famous for its unique spider web rice fields. The distinct appearance of the fields is a result of land ownership patterns. Traditionally each family owns a large circular plot of land. The land is then divided up from the center between the family members. The result is a form of land cultivation that is unique to Flores. If you are a photographer you will want to visit the Spiderweb Rice Fields surrounding Cancar. If you are a normal tourist it’s a nice place to visit for 15 minutes just for the view.

Penggajawa Beach is located in the regency of Ende in East Nusa Tenggara. Many tourists will only have seen the beach before in photos. The blue and green pebbles give the beach an instant Instagram worthy appearance making it an off the beaten track destination for people looking to spice up their Instagram feed. If you’re not into photography I wouldn’t include this on your list of things to do in Flores. 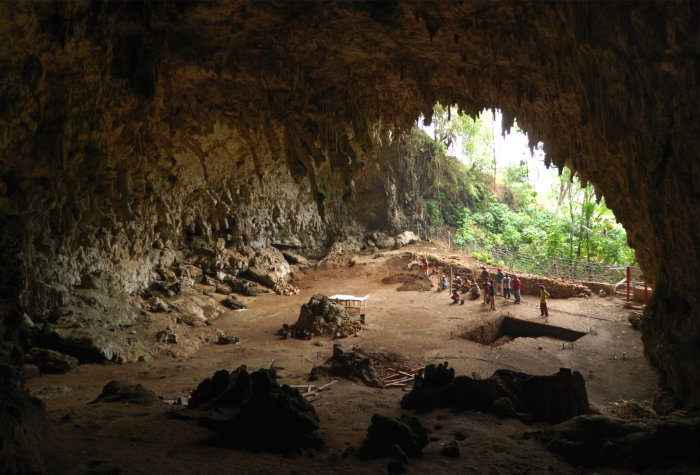 The Liang Bua Cave is where the skeleton of the Flores Hobbit was found.

If you are an archaeologist or interested in evolution you might have heard of Liang Bua Cave. The skeleton of June, Homo Floresiensis, was discovered in the cave. The skeleton is now a key part of the story of human evolution. There is a small museum in front of the caves about the archaeological site. If you have young children I’d recommend visiting Liang Bua Cave.

The Riung 17 Marine Park is one of the first Marine Parks in Flores. Ironically there are actually more than 17 islands in the Riung Chain, not that anyone seems to mind. Regardless of the name the Marine Park is a popular destination for tourists who enjoy diving and snorkelling.  You can easily arrange a day tour from the mainland to the park. One of the most popular islands to visit is “Flying Fox Island.” The name comes from the hundreds of fruit bats take to the air at sunset. 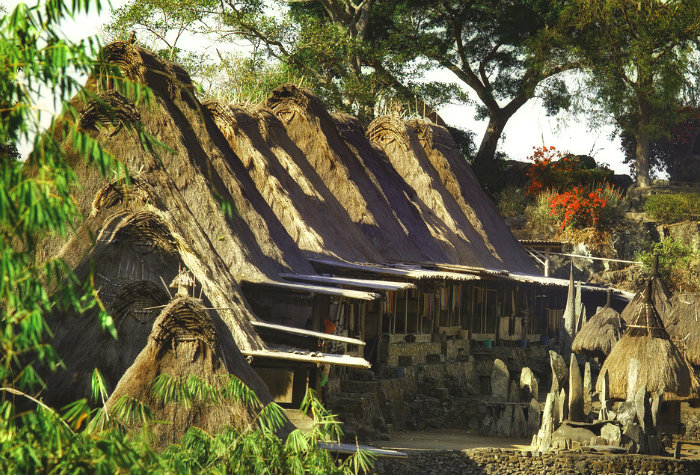 The village of Bena in the interior of Flores. It is one of the most popular tourism sites close to the town of Bajawa.

The village of Bena, of the Ngada Tribe, is one of the more commercial “Traditional Villages” that you can visit in Flores. The houses in the village are built with high thatched roofs and  decorated with the skulls of water buffalo and pig jaws. The setting is nice, but it is full of shops catering to the tourist trade. You can take a daytrip to Bena from the town of Bajawa.

Cunca Wulang Waterfall was made famous by photographers and Instagram. There is a spot after the waterfall enters the gorge where you can jump off the cliff into the water. If you have fast shutter speed you can take a great photo of kids diving into the water (or your friends diving into the water). Even though visiting Cunca Wulang is mostly about the photo it’s still a nice place to visit if you are looking for things to do in Flores. You should hire a guide from the local village when you visit. 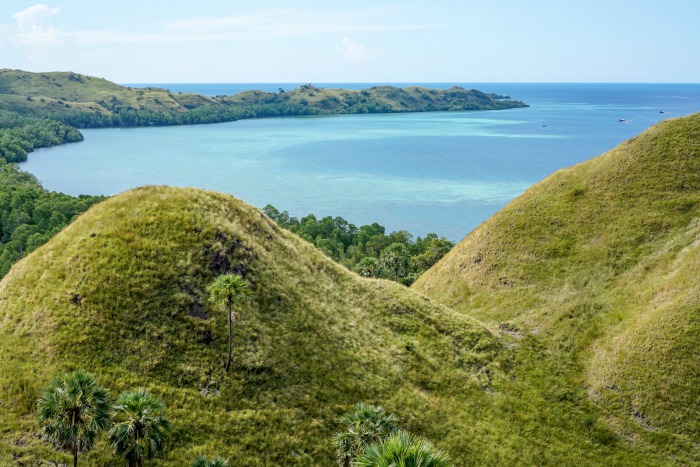 View overlooking the ocean outside the town of Labuan Bajo in Flores.

The Love Hill is a sunset point just outside of Labuan Bajo. From the top of the hill you look out over tropical grass, coconut trees and rolling hills towards the turquoise waters of the Flores Sea that stretch out to the horizon. It’s a really beautiful setting. The site is often added onto the end of a day tour from Labuan Bajo. For great views of Labuan Bajo Harbor at sunset you should check out Paradise Bar.

Sano Nggoang Lake is one of the largest and deepest, up to 500 meters deep in places, crater lakes in the world. The lake is a nice place for a day trip if you like the outdoors. From Sano Nggoang Lake you have can join hikes through the forest, soak in the hot springs or just take a swim. Sano Nggoang Lake is 35 km from Labuan Bajo. You can visit the lake on a day tour from the city. 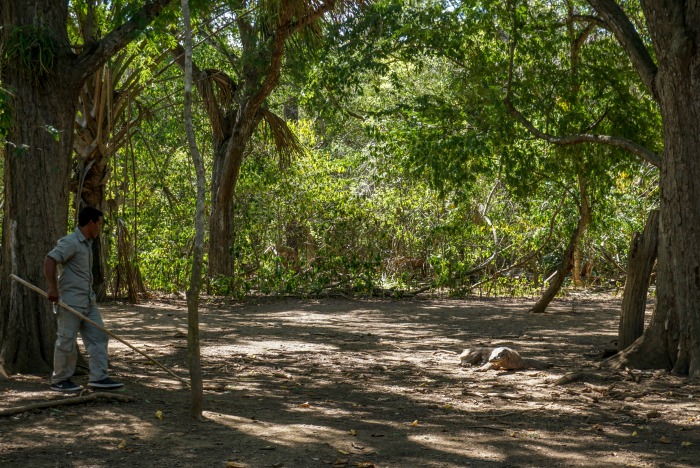 A park guide and Komodo Dragon at the Komodo National Park.

There are so many great things to do in Flores. However, you will need time to explore the island if you want to do the things on this list. To make the most of your time here set aside a minimum of a week to explore Flores. This will give you the chance to visit Labuan Bajo and also explore the highlands of Flores. I hope this has given you some inspiration.

Have you ever visited Flores? What did you think of the island? What are your favourite things to do in Flores? Share your feedback in the comments below with other readers.

FIND OUT MORE
Tags: FloresKomodoThings to do in Flores

Next post From Pirates to Pilates: 13 Unique and Fun Things To Do in Nusa Dua 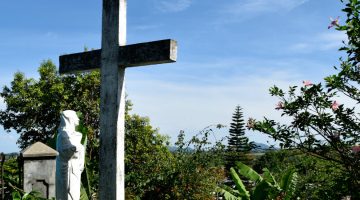