Komodo National Park is fast becoming one of Indonesia’s most popular tourist destinations. The park comprises a group of islands off the west coast of Flores, though most tourists stay in the coastal town of Labuan Bajo.

There is a lot to do here, but most visitors are drawn by one thing: the chance to see the fearsome Komodo dragon in the wild. Read on for some suggestions on how to get there, what to do, and where to stay in Komodo National Park.

Getting To Komodo National Park 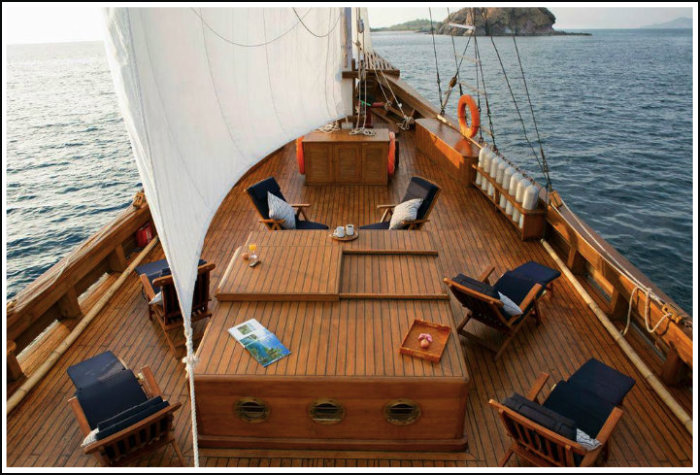 How to Get to Labuan Bajo

Getting to Komodo National Park has never been easier, thanks to the shiny new airport terminal at Komodo Airport. This has connections across Indonesia, including to Denpasar and Jakarta. This means that international visitors can take a connecting flight straight after their international arrival.

There are also connections to Bajawa and Ende, if you’re already on the island of Flores. The airport is located next to the town of Labuan Bajo on the Flores mainland. 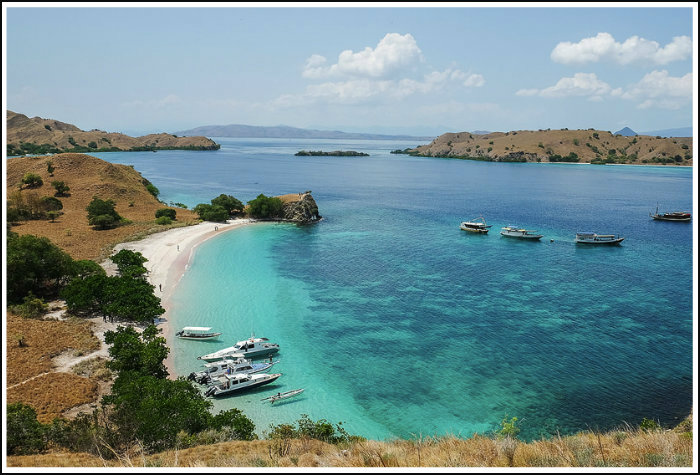 Getting to Komodo National Park by boat

Most visitors to the Komodo National Park take a boat trip from Labuan Bajo. A day trip to the island of Rinca costs around Rp 400,000, while a two-day trip including Rinca and Komodo islands is more expensive. See the ‘Things to do’ section below for more information on this.

Many visitors to Komodo National Park arrive on cruises from Lombok, which can be a very scenic journey but also a rough one. As with all boat trips from Lombok. You can find out more about, and book, a Lombok to Flores boat tours on this page. 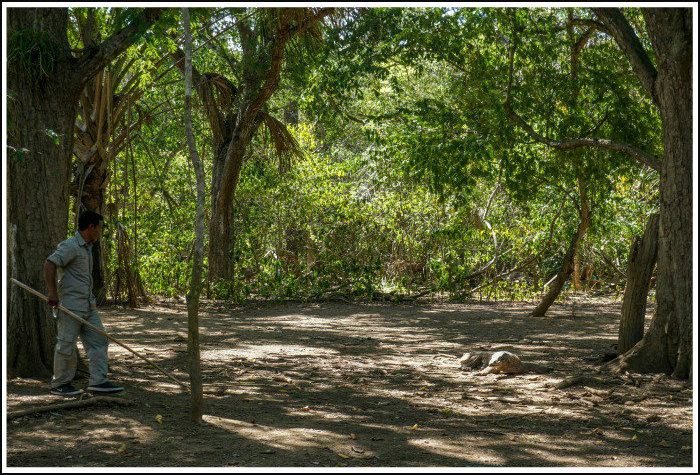 What to do in Komodo National Park

Many visitors to Komodo are unsure where to start, as there are lots of options for activities here. You can take one-day or multi-day boat trips, visit numerous islands, and enjoy some of the best diving in Indonesia. The main draw, of course, is the chance to see dragons up close. Below are a few popular options of things to do. Prices given below can vary, and do not include the park fee, which is between Rp 150,000 and Rp 220,000 for foreigners. 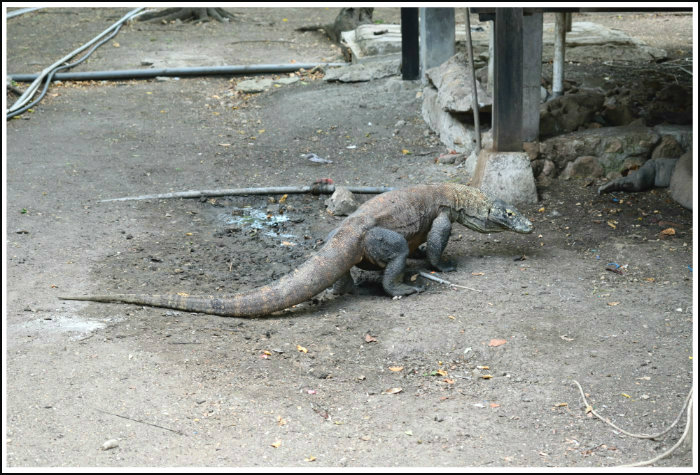 A one-day boat trip to Rinca Island is probably the most popular activity in Komodo National Park. Boats depart from Labuan Bajo at around seven in the morning, and return around three in the afternoon. A trip will usually stop at beautiful uninhabited islands, such as Kelor, for snorkelling on the way and on the way back. Prices start from around Rp 400,000 per person, and usually include lunch.

Rinca is a popular option because it is the closest of the park’s major islands to the mainland. However, it is also where you are most likely to see dragons. That’s because the population is densest on this island, and there is less cover for the dragons to hide under. In fact, you are pretty much guaranteed to see dragons on Rinca. 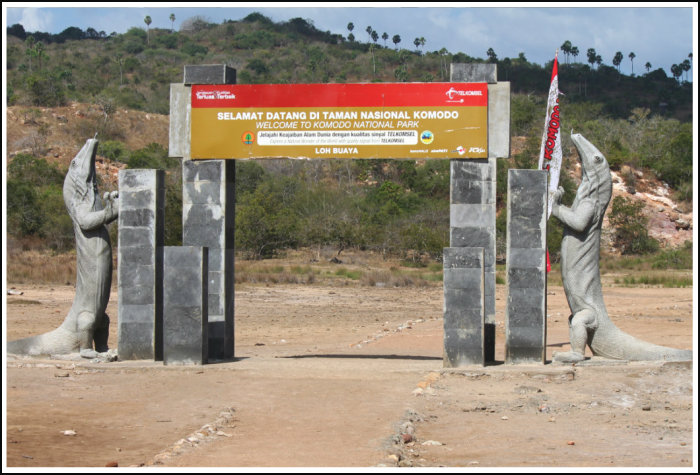 The island that gives the national park its name, Komodo, is also a good place to see dragons, although you are not as likely to spot them as on Rinca. However, local wisdom has it that the dragons are bigger on Komodo. People who visit Komodo usually do so as part of a multi-day trip, because it is further from the mainland than Rinca.

For a bit more money you can enjoy a two-day trip to Rinca Island and Komodo Island, including meals and accommodation on a boat. Activities on single- and multi-day trips are pretty similar. You will have a short guided walk on each islands, passing dragons as well as wild pigs, monkeys and megapode birds, among others. In between, you will stop off for snorkelling at peaceful islands. 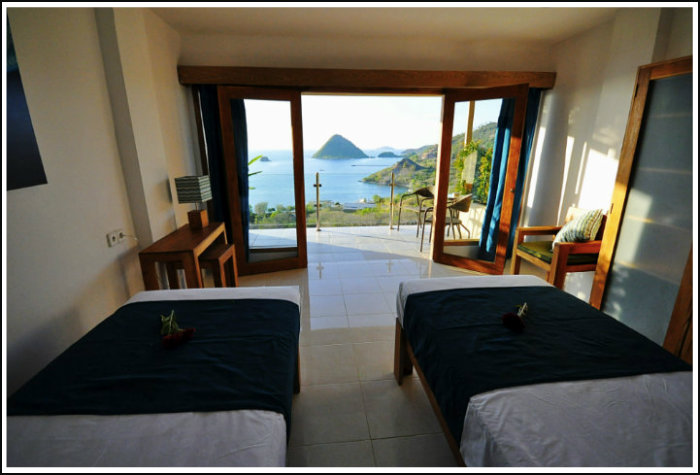 Where to Stay Around Komodo

The vast majority of visitors to Komodo National Park stay on the mainland in Labuan Bajo, which is highly recommended. Labuan Bajo is experiencing a tourism boom, but – for now – still has a sleepy, fishing village feel. There is a selection of hotels to suit all budgets. A few are listed below; check out our guide to hotels in Labuan Bajo to find out more.

For those on a tight budget, Bajo View is a great choice. It’s a basic hotel – you stay in a cylindrical tent with a mattress on the floor – but a unique one. There is less choice in Labuan Bajo when it comes to the budget end of the scale. This will change as the town becomes more and more popular. Another option

If you’re looking for a mid-range hotel, check out the funky Le Pirate, which has a great location right on the strip, a bouncing mid-level bar and a relaxing rooftop bar, where movie nights are regularly held.

At the top of the scale, try Golo Hilltop. This collection of luxurious bungalows is, as the name suggests, on the top of a hill. It affords beautiful views of the Labuan Bajo sunset, which are some of the most beautiful in all of Indonesia. Nearby is the popular Paradise Bar, where live music keeps things going late into the night.

Komodo National Park gives visitors a once-in-a-lifetime travel opportunity: to see the mighty Komodo dragon in its natural habitat. There are a variety of ways to do this, but most tourists take either a one-day trip to Rinca island or a two-day trip to Komodo and Rinca islands. Both can be easily arranged from Labuan Bajo, a charming coastal town on the west coast of Flores.

Have you visited Komodo National Park? Do you have suggestions about what to do and where to stay? Let us know in the comments below.

Next post 12 Best Hotels in Senggigi for Every Budget

Previous post How to Find the Best Indonesia Travel Insurance

Flores Travel Guide: Exploring the Home of the Dragon 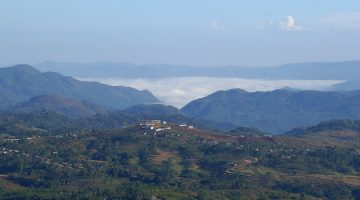 3 Day 2 Night Komodo Tour: Exploring the Home of the Dragons 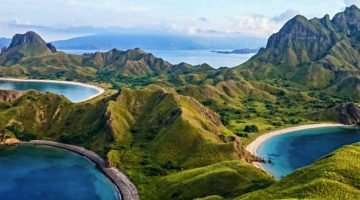 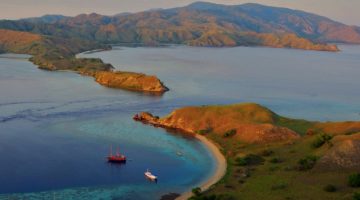