Hey guys! Do you often hear about the #SaveSharks campaign? I do, so I decided to find out more about it. Check out this interview with 3 savers from #SaveSharks Indonesia. I am sure that you will learn a lot from it!

What do you think travellers can do to help the #savesharks campaign besides help to spread the words and report to the #savesharks team every time we see miss-treatment to sharks (shark fin selling; food containing sharks; shark hunting, etc)? We do want to help!

Fahmi (F): Sadly, many people in Indonesia are not aware of the importance of maintaining and preserving sharks in the marine ecosystem. For instance, when we are traveling to a random place, sometimes we still see shark fining, shark slaughtering, or restaurants with shark on the menu.

In order to actively participate in #SaveSharks campaign, you can chat with people and share your concerns about shark fishing, how they do it etc. Then at the end you can try to share information about the ecological importance of sharks in the ocean. Including how dangerous it is to consume sharks. You can also document any activities and events regarding miss-treatment to sharks. Photos or videos including the details of location, time, and other details that needed. Let us know by contact us here  so our team can follow up the case. You can send a twitpic to us, mention @itong_hiu with the hash-tag #SaveSharks. At least, with the hash-tag we can create and build social awareness about the issue. Or upload images to our Facebook fanpage.

Documentation from various parts of Indonesia is very useful for our team Save Sharks Indonesia campaign. It helps is encourage the Government to develop new policies / laws relating to shark protection.

On our part, we try to offer fishermen a better alternative to shark fishing. The least we can do is we try convey information about sharks and hopefully people can be more aware about the realities of shark fishing.

How much of an affect has commercial shark fishing had on shark populations in Indonesia?
Adhis (A): Very influential. I personally think, from discussions with many people, that shark fishing results in only short term monetary benefits when compared to keeping the sharks in their natural habitat. Maintaining the food chain or the ecosystem balance will benefit not only the economic value of the area for tourism, but also in terms of environmental sustainability.

Catching sharks on a big scale would result in a decrease in the shark population and is counter productive in terms of sustainability. As a top predator that plays an important role in the food chain, commercial shark fishing has major impacts on the marine ecosystem. Given the habits of sharks that eat sick fishes, it surely will make the sea condition more healthy.

If sharks are caught just for their fins and then thrown back again into the sea, it clearly does not have a good impact on the sustainability of the sea. It is only economically beneficial to the catcher alone but detrimental to many other parties.

Why it is so important to # savesharks?

Dithi (D): Why not? Hahaha! Since elementary school, I was taught that living beings in this world are made up of three elements: people, animals and plants. All of them have their respective roles in the natural world as earth’s living creatures. I believe that they mutually sustain each others lives. More than that, I believe, if humans can live together in harmony without interfering with each other, including the human relationship with sharks, the Earth can survive much longer. #Savesharks, save human lives.

Do you think that we do enough to protect the ocean? What conservation initiatives would you like the Indonesian Government to focus on?

D: Just talking is not enough. I don’t think there is enough in place to protect sharks. I feel that part of the problem is that because nature is always changing, people find it hard to protect it. That said, although it is rarely seen directly, I think that people who live on or near the coast in Indonesia are trying to protect the nature, which is their living space.

Do you have any families member / friends that have actually ever tasted shark fin soup? What they think about the food? I never have and am not really interested in trying it, so I am a bit curious about why it is so popular.

F: A co-worker friend from the Eastern Indonesian branch said (in a group chat at the office) with pride that her children who are still toddlers routinely eat shark meat bought from the supermarket. She  thought that shark is high in protein and good for growing children. When I told her about the facts behind the shark meat and fins, she was quite shocked to hear about it and regretted feeding her baby shark. This I think shows the importance of sharing true information about eating sharks.

D: Actually, I did once eat shark soup, they said it had shark tongue in it. Indonesian spices is the one that creates a sense of delicious food and dismisses the smell of the meat. But when I tasted the meat without sauce, it tasted pretty bland.

A: One of my friends, Hani Amallia, is a Chef. She once told me that she had tasted shark fin soup and she said it was very tasty. Though, that was probably because the chef that made the shark soup was really smart enough to make it taste delicious. She tasted the shark fin soup around her home area in the Bogor. Hani has eaten shark soup before knowing anything about the #savesharks campaign, which she finally heard about from me. If all consumers are now getting wise and understand the importance of sharks existence in the ecosystem then it will be easier to #savesharks.

According to you, what is the best seafood choices to eat and why?

A: Tuna and salmon! Besides the high content of omega 3 nutritional value was remarkable and can reportedly can reduce bad cholesterol in the blood. Not to mention, it is also very delicious! I really like to eat salmon sushi and tuna curry. Tasty more than everything.. If tuna and salmon are more delicious and nutritious than sharks, then why do we need to taste sharks that clearly have high levels of mercury in it. Remember that mercury is not good for the body! So lets #savesharks!

D: I love crab! The reason is because it has its own sensation when eating it. Haha.. By the way, WWF launched a seafood guide on marine life that is safe to eat. One of my favorites is squid/cuttlefish.

F: Fishes such as grouper, tuna, giant trevally, salmon. Why? Because these fishes have protein and omega 3, much more than any other seafood. It also has less cholesterol than squid, shrimp or scallops. Its populations in the ocean are bigger than others, fisheries more easily reproduce. So I guess it is more eco-friendly as well.

What is your favorite type of shark? Why?

F: There are 2! Whale Shark or Rhincodon typus in Latin. Although a big shark, the whale shark just eats plankton and small fishes. The whale shark lives in tropical waters and an adult whale sharks can reach a length of up to 20 meters. I really dream of freediving and playing around with whale sharks in the waters of Taman Nasional Teluk Cenderawasih. Amen!

The second is the Bamboo Shark or Hemicyllium Freycineti. This unique shark species can be found in the waters of the Indo- pacific. It has a small elongated body with a pattern of brown spots and lives around the reefs.

A: Whale Shark (Rhincodon typus), because the whale sharks class moves very slowly and they just eat phytoplankton. I wouldn’t be realy scared of this type of shark. I’d be a lot more careful around other types of sharks though (a lot of people think that sharks actually like to attack humans, but this isn’t actually true, you still need to be careful though). According to my level of caution – a whale shark would be a lot more friendly than a great white shark!

D: I have only ever seen a type of white tip shark. It was quite intense when I first saw it from a distance. However, I really want to seim with a whale shark, my friends who have done it tell me it is an amazing experience. The Whale Shark is famous for not being aggressive and enjoying playing with divers. Whale sharks are also the tourism icon of Raja Ampat, one of the prime tourist destinations in Indonesia.

Can you tell me the most unique fact about sharks that fascinates you?

F: Many people who consume shark fins believe in an ancient myth that it is good for strength, health and much more. The myth is especially strong in the Chinese community. In fact, the shark body contains mercury 42x above the safe limit. This happens because the shark is a top predator in the ocean. The mercury as well as other heavy metals bio-accumulate in the body. The worst thing about mercury is that when it has entered into the human body, it cannot get out again. It will settle and damage your internal organs. That is so scary isn’t it? So do you still want to consume sharks?

D: Actually, what first caught my attention were the stories of shark attacks. I later learnt that sharks aren’t actually interested in attacking humans. Humans swimming at the beach or in the sea looks like the movement of seals or sea turtles. When the shark sees the shadow of a human in the water, the shark comes closer and tries to bite it. But, when it takes a bite, the shark becomes ‘aware’ that it wasn’t the meal they were after. If you think about it, it’s kind of funny because you have to imagine that the sharks are eating the wrong meat and then puking it up again. It turns out that the whole reason that they are considered really scary is because they make mistakes. We need to try to reinforce this fact that sharks do not mean to attack humans. Still, this doesn’t mean sharks are friendly!

A: Oh! Do you know that sharks mostly eat injured / sick fish? With sharks in it, the sea stays clean from fishes that are sick/injured. 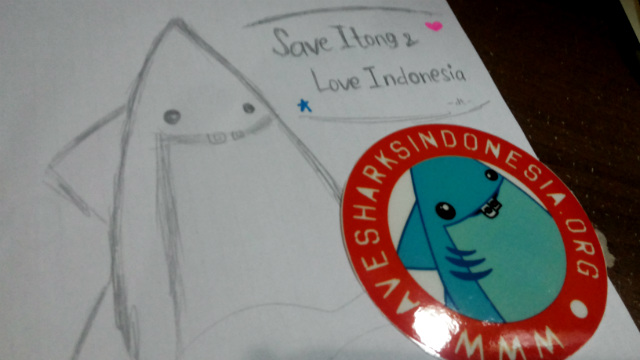 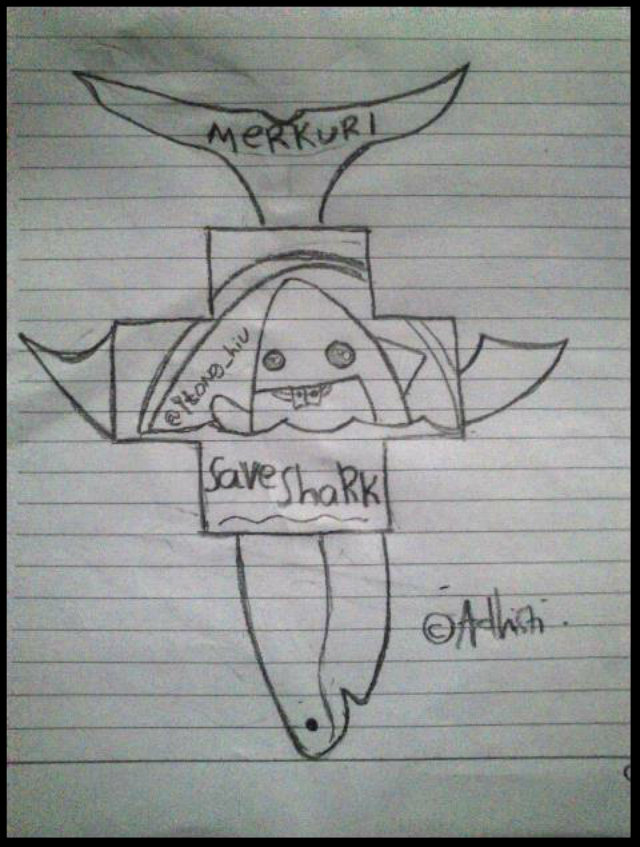 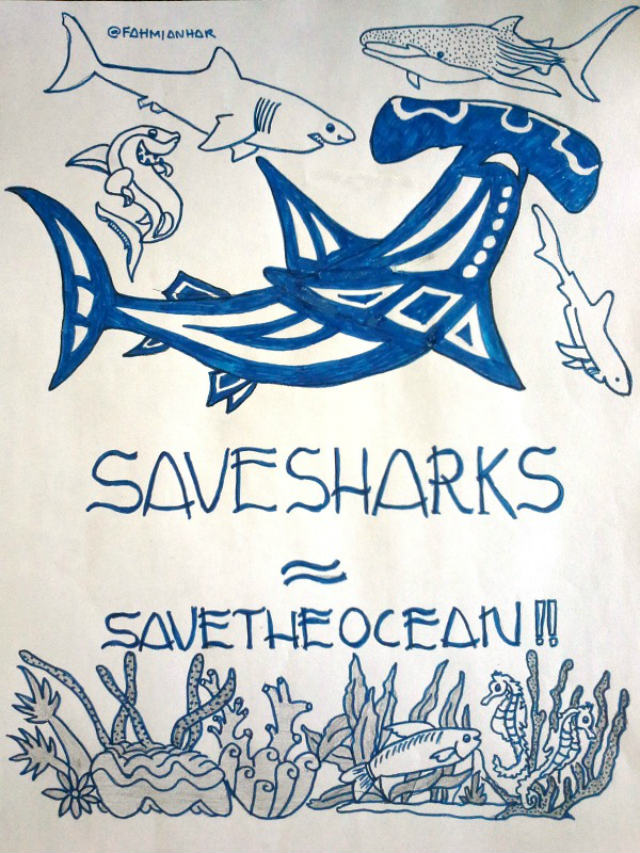 So, do you interested to join and support the campaign? Spread the word about the important role of sharks in the ocean and don’t contribute to their extinction by purchasing shark products. The ocean need your help! 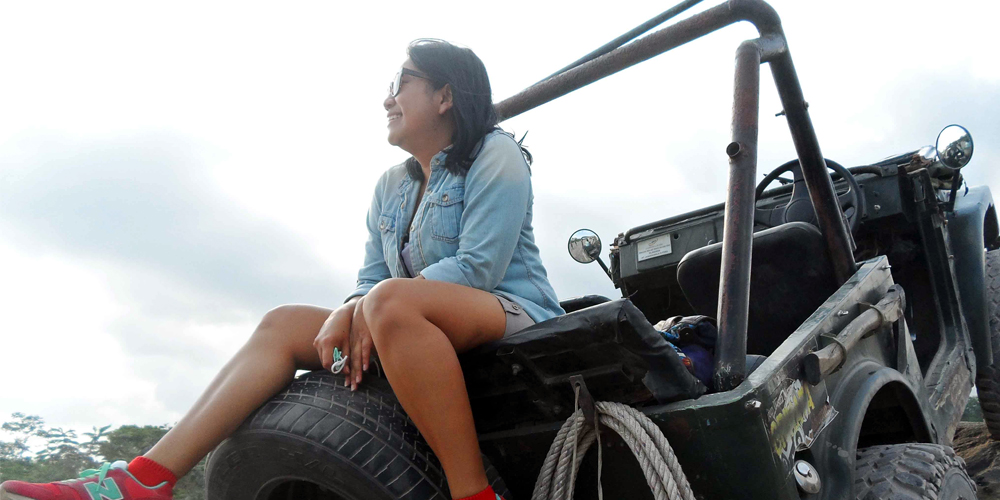