Gunung Kawi Sebatu is a Hindu water temple dedicated to Vishnu, who is said to rule over water. The site is located in a dip in the land and is surrounded on three sides by stonewalls and the fourth by a steep forested slope. The temple complex is built on a natural spring, which feed a series of ponds and pools.

If you’re in Ubud also read:

2 Temples and a Hidden Waterfall: An Amazing Daytrip Around Ubud

36 Incredible and Fun Things to do in Bali

A combination of all the greenery combined with the water features gives Gunung Kawi Sebatu a calm and peaceful atmosphere. In fact this is probably one of the prettiest temples in Bali and it’s very likely that you’ll have the place almost to yourself when you visit. 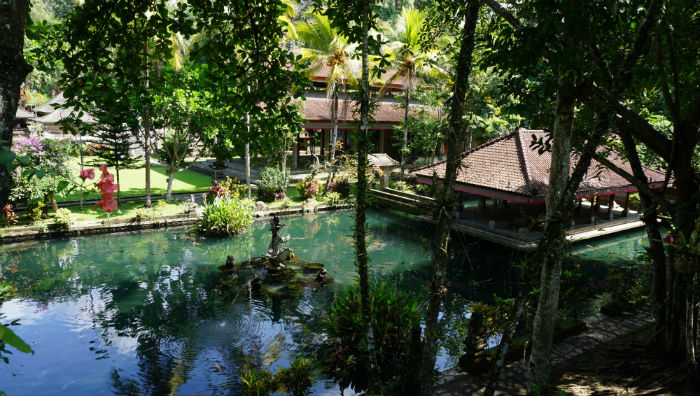 The view of the lake from the outside of Gunung Kawi Sebatu.

Like many temples around Ubud, Gunung Kawi Sebatu is open from 8:00 am in the morning and closes at 4:00 in the afternoon. The temple is open every day of the week. It costs Rp 15,000 for an adult and Rp 7,500 for a child to enter. Once a year a big festival called Purnama Sasih Kasa is held at Gunung Kawi Sebatu. In 2016 th festival will be held on 19 July. 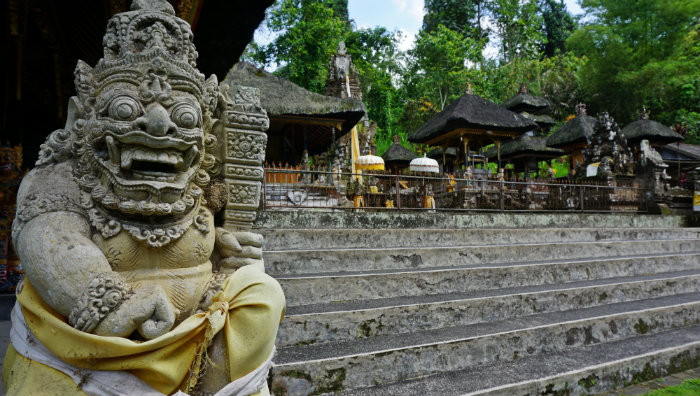 The photo was taken in front of the main shrines in Gunung Kawi Sebatu temple.

There are three main parts to Gunung Kawi Sebatu temple. Walking down the steps from the entrance of the temple the first thing that will catch your eye is the large lake next to a large open-air pavilion. Fat carp swim in the pond under water lilies overlooked by a statue of the goddess Sarasvati, which tops a large fountain in the middle of the lake.

As you get to the bottom of the steps you arrive at a large open courtyard. On the far side of the courtyard is a small wall with two doors built into it. Although you can’t see it at first, immediately behind the lake is a walled off area with two pools for bathing. 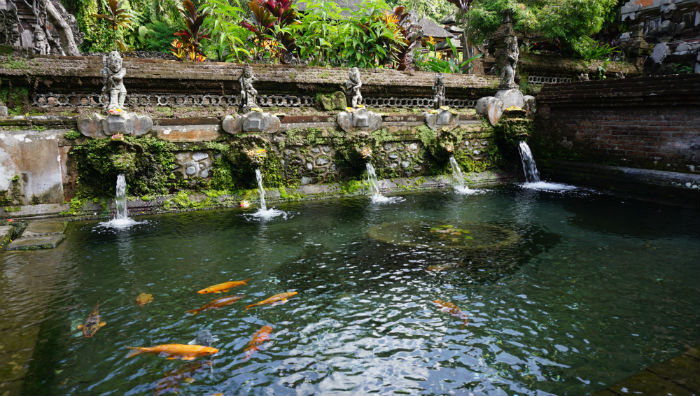 You’ll see a lot of carp swimming around and enjoying life at Gunung Kawi Sebatu.

If you go through the doorways on the far side of the courtyard you will enter the elevated temple grounds. There are two different parts to this section. The door on the far left hand side brings you into the ritual bathing area. There are two pools, which are fed by 10 waterspouts. It’s an incredibly peaceful place and when I visited here the only other thing near the pool was a small snake that quickly slithered off into the undergrowth behind the pool.

The doorway on the right side brings you brings you to the main section of the temple where you will find several shrines and small stone buildings. To the left of the shrines is Candi Bentar. The shrine is located behind a small wall in the center of a pool surrounded by water. The view of the shrine surrounded by water against the backdrop of the temple makes for a beautiful photo. 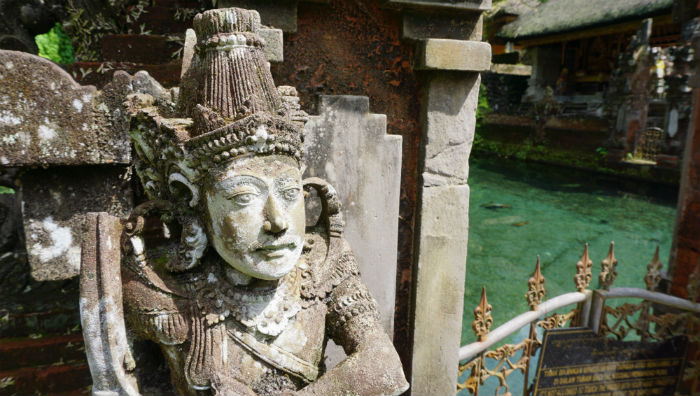 A stone statue by the gates to the Candi Bentar shrine.

Once you’ve finished exploring the main section of Gunung Kawi Sebatu, make sure to visit the large bathing pools. The pools are located behind the lake on the way to the steps that you climb to exit the temple grounds. High walls enclose the two bathing pools so it’s impossible to see inside. As you enter you’ll see a sign there that says ‘mandi,’ which means toilet in Indonesian. Don’t be put off by the sign; the bathing pools are worth seeing. 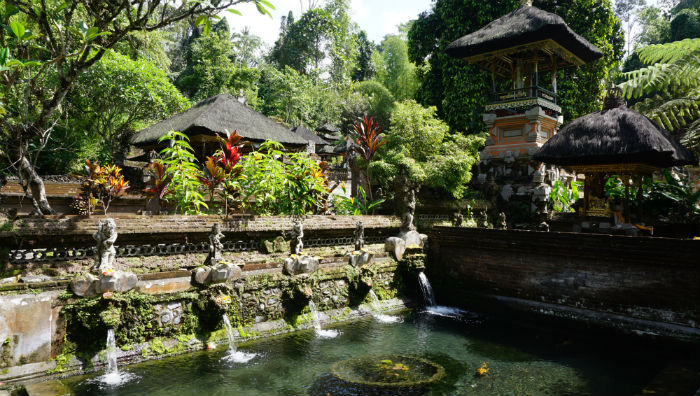 Photo taken at one of the ritual bathing pools in the temple grounds.

Gunung Kawi Sebatu is probably one of my favorite temples in Bali. When I visited on a weekday morning I had the temple almost to myself. It’s a beautiful place to wander quietly around and relax in. Give yourself at least an hour to explore the temple (no, it’s not that big, but it is that nice). 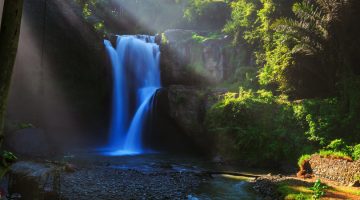 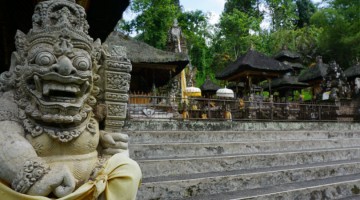