One of the first times I heard about Nusa Penida was when a friend talked about “diving with Mola-Mola.” The giant sunfish are probably one of the most famous things about the island (you can usually dive with them from July-September). I haven’t yet had the chance to go diving/swimming with Mola-Mola in Nusa Penida. However the other year I finally visited the island. And I had a great adventure! Awesome. So awesome :p

I remember I created an article about Lembongan Island (Nusa Lembongan) and called it: Escaping Busy Bali (you can check the article here). It would be a better title for visiting Nusa Penida. Together with Nusa Lembongan and Nusa Ceningan, Nusa Penida is the least visited island off the coast of Bali. Though that is changing. 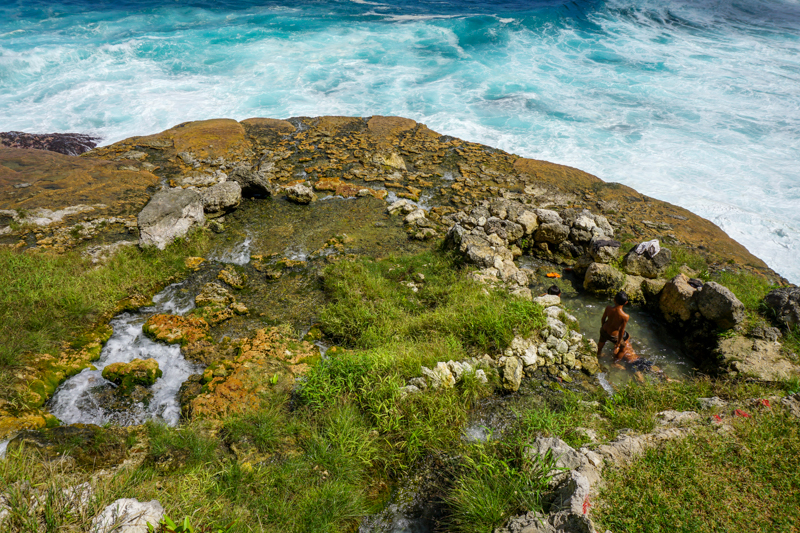 I visited Nusa Penida in May 2016 and the island was relatively empty. Yet I met a woman who visited back in 1997, and she said it breaks her heart how Nusa Penida has become so commercialized. I guess everything is relative… On a side note, her research was on black magic. Supposedly Nusa Penida is famous with Balinese people for its black magic. The local shamans on the island are very powerful. Or at least that’s what they say.

My partner and I had 2 days full of adventures on the island. That’s one day more than most people (Nusa Penida is a day trip destination from the Bali mainland for those who chase Instagrammable spots). We bumped along stone tracks, probably 70% of the roads in Nusa Penida are still off-road, and visited the isolated sites.

To do this we rented a motorbike. It is absolutely the best way to explore the island. The motorbike rental was Rp 70,000-Rp 100,000. If you can’t ride a motorbike, you can get a motorbike taxi for a day (I think it is around Rp 300,000) or rent a car (not sure how much does it costs and at the time I didn’t see many cars on the island).

I’d like to share some of the highlights. So here is my itinerary; few spots and things to do in Nusa Penida. There are a few Instagrammable spots covered 😉 Hope this inspires you to visit the island! 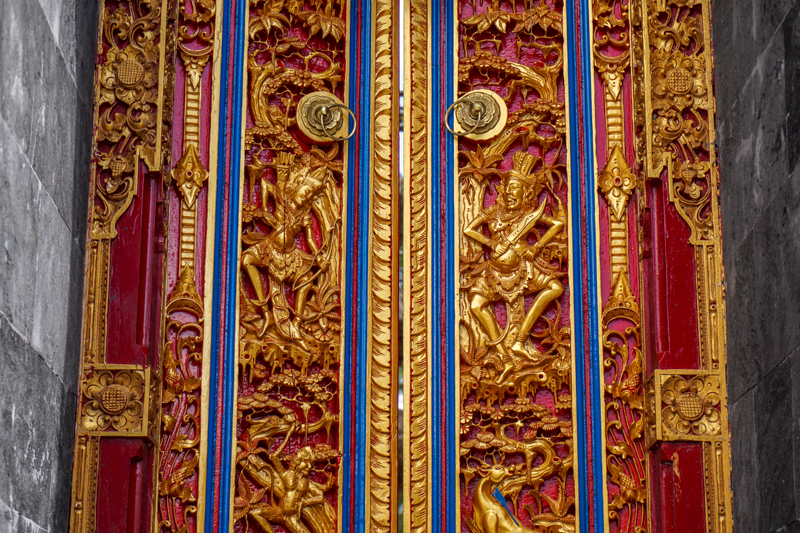 Pura Puncak Mundi was recommended by one of our Balinese friends. The temple might look like other temples around Bali, but the location makes it special. Pura Puncak Mundi, like its name suggest, is built on the peak of Mundi Hill. My partner wasn’t allowed in because he was wearing shorts. So I entered the Pura accompanied by the temple guard and walked around the temple. There were several interesting, and as always, intricate carvings typical of Bali inside the temple. 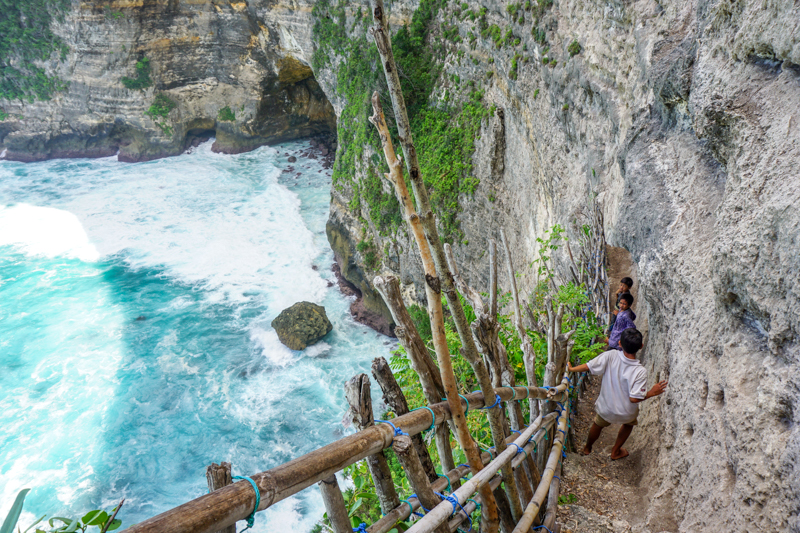 This is probably the most memorable place for me in Nusa Penida. To reach the waterfall you need to climb down a small path that hangs on the side of a cliff face. It was challenging to walk down. Don’t even try it if you’re scared of heights!

Three little boys accompanied me on my journey to the bottom of the cliff. It was like their playground. When we reached the bottom they went straight for a bath (there were different pools for girls and boys). This waterfall used to be one of the few sources of water on the island. People used to go down with a bucket, fill it up, and make the climb back up. And the path was even worse than it is now… You’ll understand what that means if you visit. 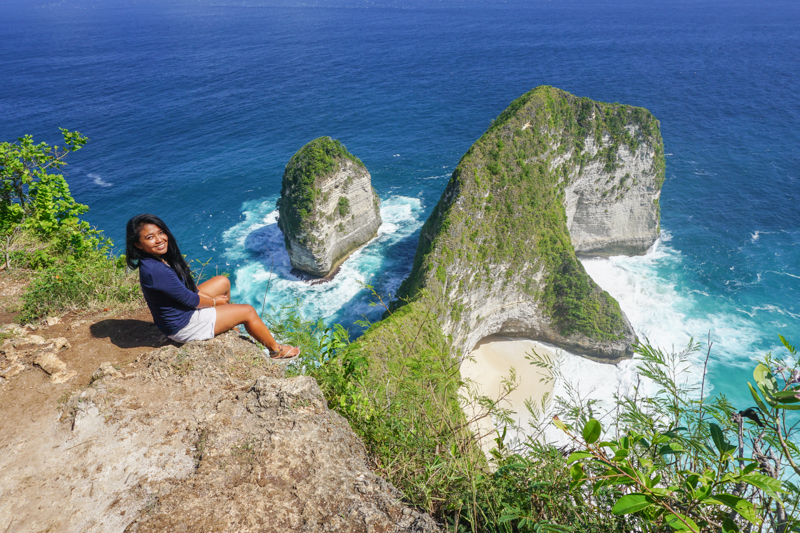 Kelingking Beach is one of the most Instagrammable spots on Nusa Penida. Locals call the place Karang Dawa Viewpoint rather than Kelingking Beach. The view from the top is very similar to Navagio Beach, in Greece. It is beautiful. While I didn’t get the chance to climb down to the beach, some of my friends said that it is possible. Though the path is probably as steep as the one to Seganing Waterfall. I was happy with the view from the top, especially after just visiting Seganing. 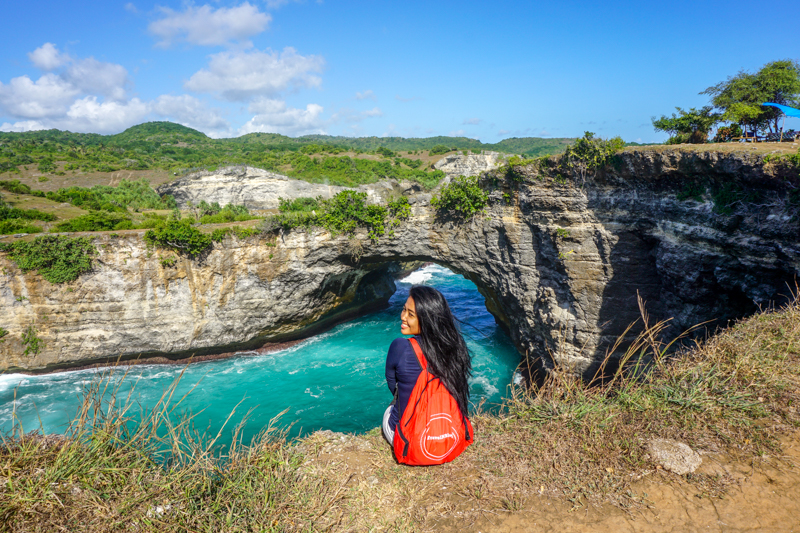 Pasir Ulug and Angel’s Billabong are located right next to each other. We visited Pasir Uug and spent sometime enjoying the place, but we missed the Angel’s Billabong. But we did meet a local guy who had been cut by the coral at Angel’s Billabong. So word of advice: while it looks really calm, Angel’s Billabong is a spot where you really need to be careful. Don’t get yourself hurt/lost (there was a guy who was swept out to see and was found around Chrystal Bay. And all because of a photo!). 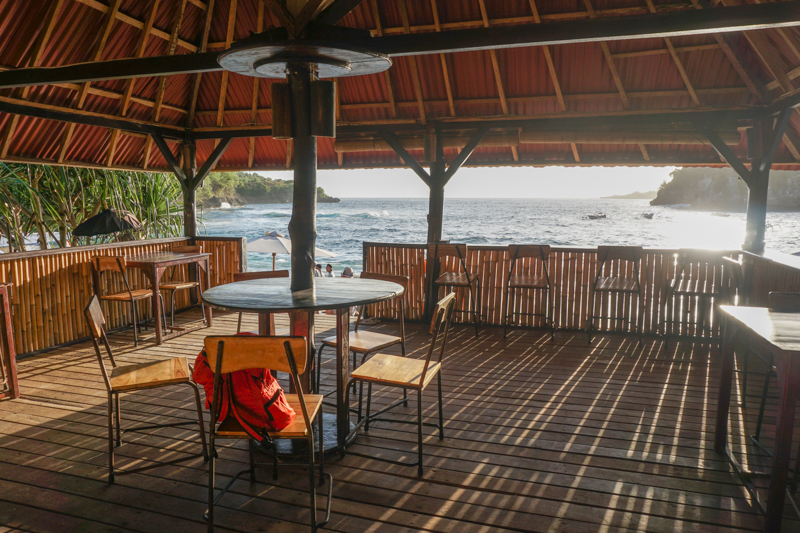 Chrystal Bay Beach is one of my favourite beaches in Indonesia. You can do a lot of things here; swimming, sunbathing, snorkeling, surfing, or just chilling at one of the cafes. Compared to a lot of destinations around Nusa Penida, Chrystal Bay Beach is easy to reach. The road access to the beach is nice and it is close to one of the biggest towns in Nusa Penida: Ped. It’s probably developed a lot since the last time I visited.

We started out quite early on the second day, because we had to leave in the afternoon. The plan was to wake up before sunrise, but we only left the hotel after the sun was over the horizon. Still, we managed to do quite a lot of things before we got the ferry back to Bali. 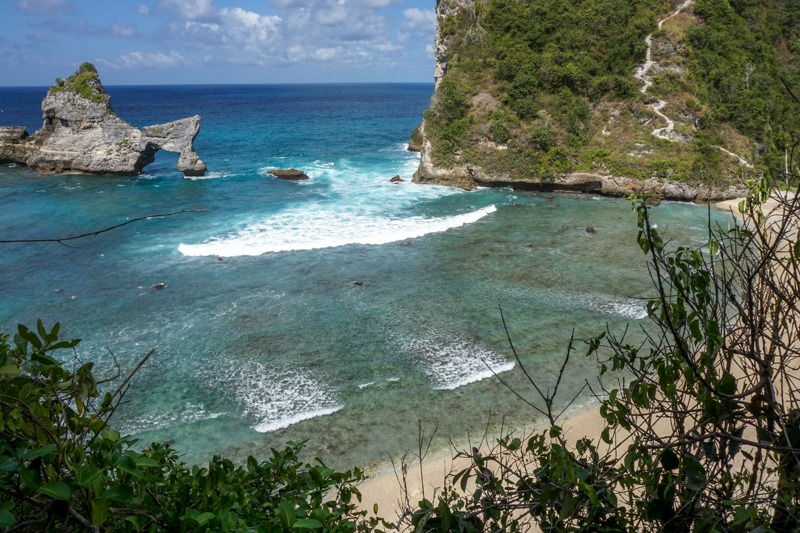 A lot of people love Atuh Beach, but it was not for me. I liked the unique rock forms around the beach, but the beach itself wasn’t great. It is too shallow for swimming and has a lot of rocks. The beach is quite far from the town so it adds the hassle. That and it’s a pain to get down to the beach (maybe that’s changed, but there wasn’t a good path when we visited). Still, if you’re a photographer try to visit the beach for sunrise. I’ve seen a lot of nice sunrise photos of the beach. I arrived too late so I missed out. 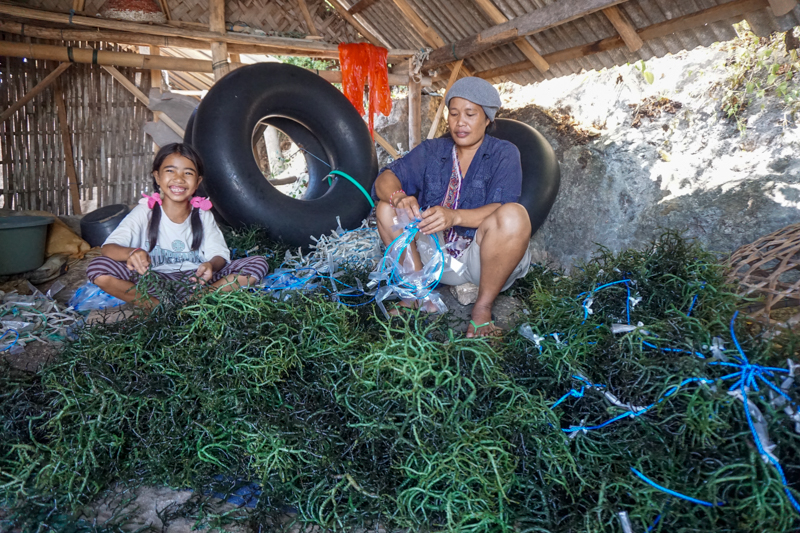 The Villages of the Seaweed Farmers

Located close to Ped, on the way to Atuh Beach, you’ll see plenty of seaweed farms. I decided to stop and had a quick chat with some of the locals here. It was nice, but it must be a tough job. The price of seaweed is so low. At the time it was Rp 4,000 per kg. I can’t imagine what it must be like to make a living being seaweed farmers considering the tough job they do under the heat of the sun. 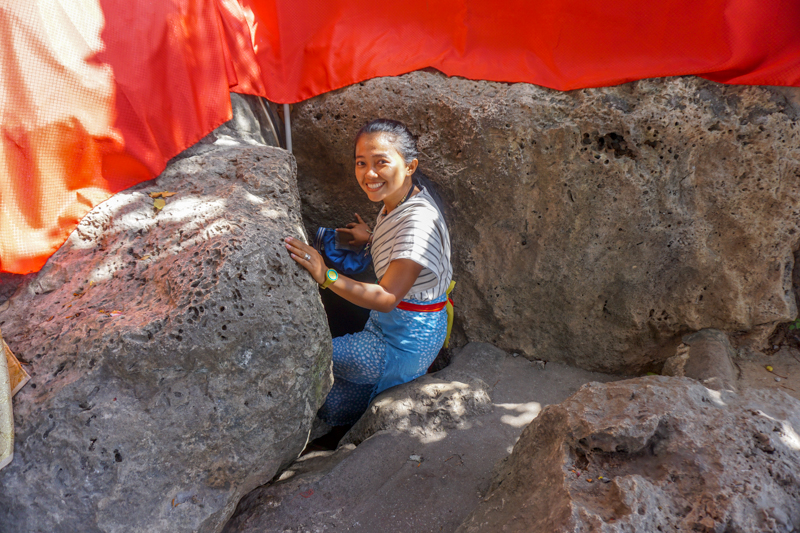 Pura Gua Giri Putri was the second temple recommended by our Balinese friend. He said it is not like casual temples you see in Bali. We totally agree. The temple is built inside a huge cave. You can’t imagine the cave can accommodate up to 5,000 people when you see the entrance.

At the end of the cave you’ll find a prayer area dedicated to Dewi Kwan Im, complete with the oriental decoration with the shades of red and gold. Well worth a visit.

There are many more places you can visit and things you can do in Nusa Penida (including have a dive session with, hopefully, Mr. Mola Mola). Try to visit for more than a day. I think my 2 Day 1 Night stay on Nusa Penida was perfect. With two days you can explore to the West (my Day 1 itinerary) and to the East (my Day 2 itinerary) and see plenty of the sites. However, if your time in Bali is limited, you can definitely do a day trip to Nusa Penida.

Have you ever been to Nusa Penida? What was your favourite spot or thing to do on the island? Share your thoughts in the comment section below.

Previous post Gili Air: Sociability and Tranquillity on the Gilis’