I’d seen the pictures on Instagram and I was already hooked. The swing at Charlie’s Chocolate Factory was something I just had to try. To fly between palm trees over a golden beach with a view of the ocean, it looked and sounded like a lot of fun (a bit like an adult playground). So I knew I had to visit when I arranged a car rental. 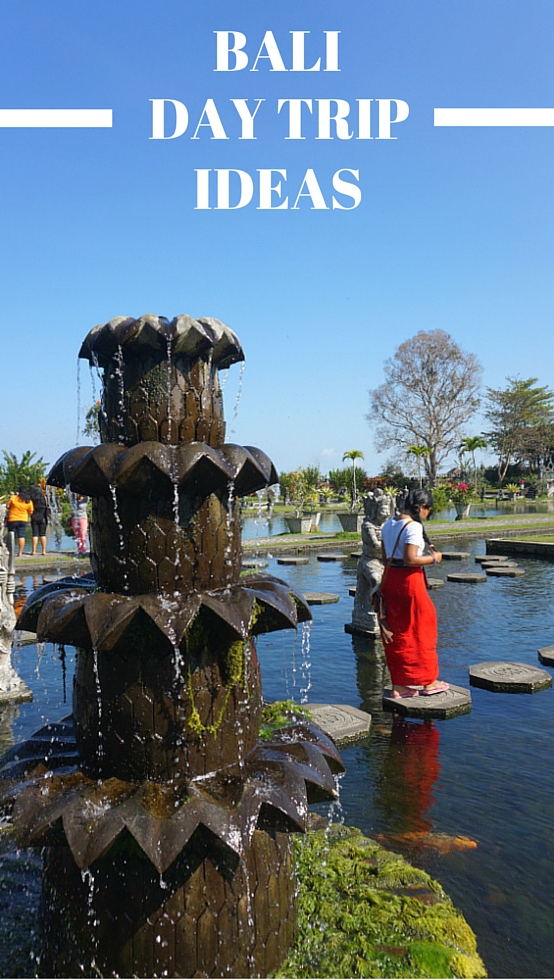 Charlie’s Chocolate Factory is in the South East of Bali, in Jasri village to be exact. It would take a few hours to drive there from Ubud and so I wanted to turn the journey into a Bali day trip. To make the day a bit more special we added Tirta Gangga (the Bali Water Palace) onto the itinerary. It promised to be an exciting day.

We decided to take the coastal motorway on the way and return on the inland road. We set off from Ubud at around 9 in the morning heading in the general direction of Denpasar. The traffic was light and with the morning sunshine we quickly got into the holiday spirit.

There was not much to see on the way to the coast, but once we hit the motorway the drive was a lot more relaxing. We drove slowly, enjoying the views of the rice fields, the volcanoes and the sea. There wasn’t any rush and so we stopped a few times along the way to have a look at some beaches and take photographs.

It took slightly more than two hours to reach Charlie’s Chocolate Factory, which is near Candidasa. That turned out to be the easy part. It took at least 20 minutes of driving down dead ends and taking u-turns to actually find the chocolate factory, which is not well signposted.

Eventually, we found the dirt track that led through the palm trees towards Charlie’s Chocolate Compound. I was excited and looking forward to arriving at the first destination for our Bali tour. We parked up outside of the wooden fence that surrounded the Chocolate Factory. A woman sat in front of the entrance cooking satay over a small BBQ.

Entering the Chocolate Factory felt like walking into a different world. The buildings looked like they had been taken from the set of Lord of the Rings. They were different and eye catching. Overlooking the ocean there was a wooden pirate ship, built as a children’s playground, which was surrounded by palm trees. Then there were the swings, three of them in a row, set between palm trees, overlooking the ocean. It was a beautiful setting.

The coffee kitchen was in the building that looked like a wooden wig-wam. We went directly to it and I introduced myself to the cook. Wayan was busy making hot chocolate drinks, but looked up and smiled at me. I asked about the Chocolate and he told me that they weren’t selling any at the moment, but I was welcome to order a drink from the menu.

I decided to order a warm mug of hot chocolate and sat down at one of the small wooden tables. That was when the goose introduced itself to me. I have to say I was a bit scared at first. Geese don’t look like very friendly creatures. They have those reptilian eyes that just stare at you and the beak is bright orange and looks dangerously sharp. I wasn’t the only person to feel that way, but it turn out that my fears were completely unfounded. 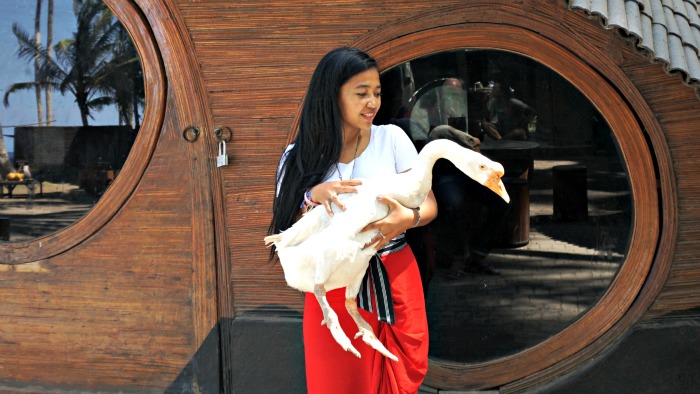 The goose, whose name is Agus, turned out to be very friendly. Wayan picked him up with a big sweep of his arms and held Agus to his chest. The goose blinked a few times, ruffled his feathers and turned its head when Agus stroked it.

After a bit of reassurance, I asked Wayan if I could hold Agus and he promptly dropped him into my arms. Agus sat there completely still, apart from his head that twisted to look at me. I held him for a while, before putting him down so he could continue his hunt for food.

While Wayan made me a cup of hot chocolate I wandered over to the beachfront to stare at the ocean (and prepare myself for the swing). Looking at the swings I knew that the one I wanted to use was in the middle. Immediately behind the swing was a ladder, which you could obviously climb up and swing from… And that’s exactly what I did ☺ 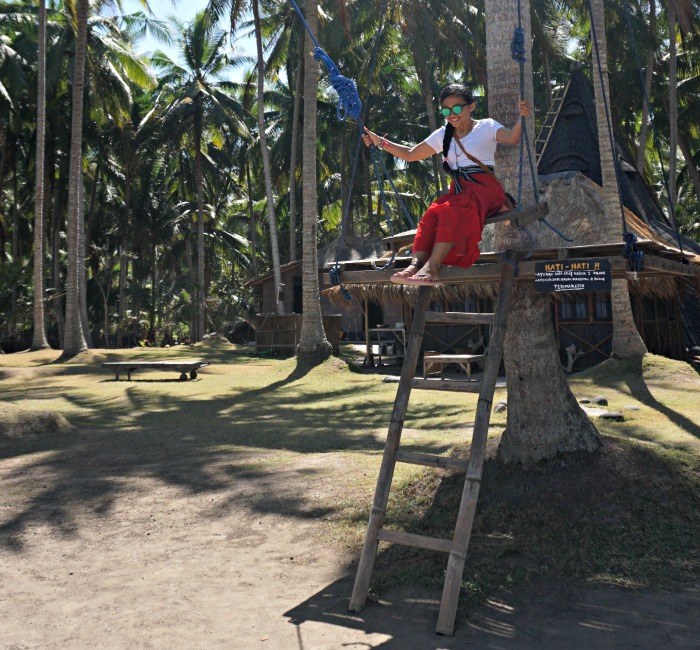 My heart was in my mouth for half a second as I jumped down from the platform, then there was a rush of air and I was flying in the air. It was exhilarating. The swing was just as much fun as I imagined it would be. I spent the next ten minutes playing on the swing and had almost forgotten about my hot chocolate, before Wayan reminded me about the hot chocolate.

I drank the hot chocolate and spent the next ten minutes talking to Wayan and asking him about the Chocolate Factory. It was nice just sitting and relaxing surrounded by so much beauty. I was glad that I had visited Charlie’s Chocolate Factory, but I knew it was time to head off for the next part of my Bali day trip.

The Tirta Gangga water palace was a thirty-minute drive up the coast and inland from Charlie’s Chocolate Factory. The road was almost empty and the scenery of green paddy fields and rolling hills was beautiful. It felt like in no time at all that we arrived at the entrance to the palace. 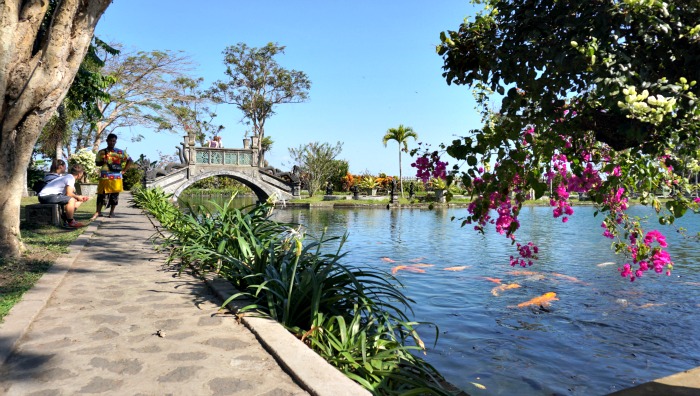 Tirta Gangga is a former royal palace that was built in 1948. It is one of my favorite spots in Bali. The palace grounds are beautifully designed and the atmosphere is incredibly relaxing. As you’d expect from the name, the main theme of the grounds is water.

As soon as I walked through the entrance I fell in love (again). The grounds of the Water Palace are broken up into a series of ponds, fountains, lakes and swimming pools that are all fed from underground natural springs. The grounds are all linked together by stepping-stones, bridges and paths. 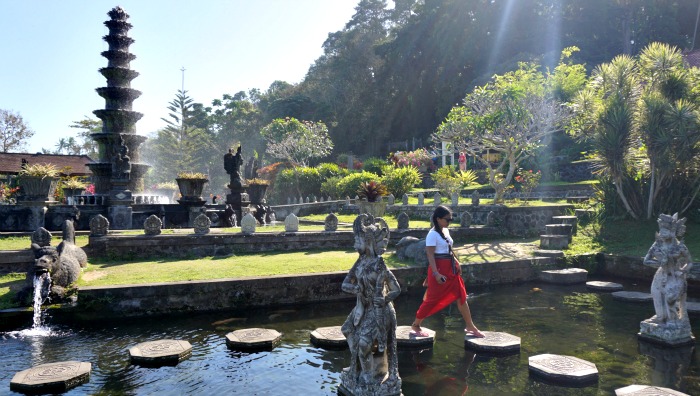 I spent a very relaxing 90-minutes walking around the grounds of the palace. It was the second time that I made the visit to Tirta Gangga, but it was just as much fun as the first time I visited. If I had been more prepared I might have brought my swimming stuff and taken a relaxing dip in the pool, but I didn’t this time!

The restaurant at Tirta Gangga sells really nice Balinese, Indonesian and Western dishes. We had a nice meal in the outside patio. It was the perfect way to end our Bali day trip. Well, I thought so at the time (I didn’t realize that we still had another highlight in front of us).

On the drive back to Ubud we drove cross-country through the highlands of Bali. We followed a small winding road most of the way that was almost completely empty of traffic and we were surrounded by beautiful countryside. We stopped multiple times along the way to simply stop and stare at the beautiful rice terraces that were cut into the lush green hills. 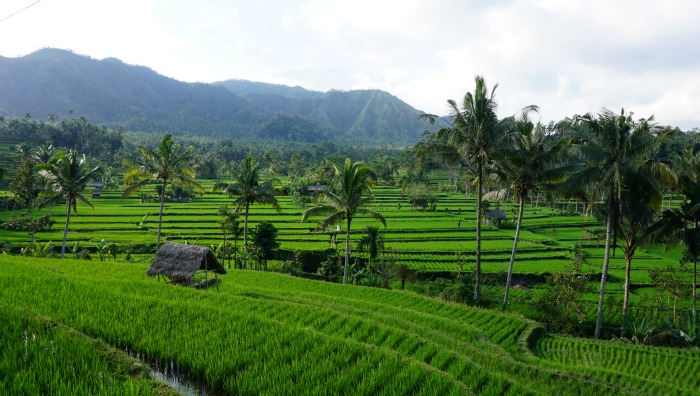 This part of the drive turned out to be one of the hidden highlights of our Bali day trip itinerary. The views were, as I’m sure you’ll agree, pretty spectacular. We ended up following a jeep on the journey to Ubud and found ourselves stopping at all of the same spots along the way to take photos. It was a great way to end the day trip.

There are a lot of great things to do in the South East of Bali. There are two really great options that you could add to your day trip to the South East of Bali, one of which is a local highlight that I had never heard of before I arrived (which I want to share with you now). The other one that I would like to recommend is Taman Ujung (Ujung Water Palace).

A friend of mine who lives in Bali recommended Uforia chocolate. She told me that she always goes there whenever she visits Candidasa. You can buy a large variety of chocolate at the Uforia Factory ranging from vanilla through to espresso and cashew. 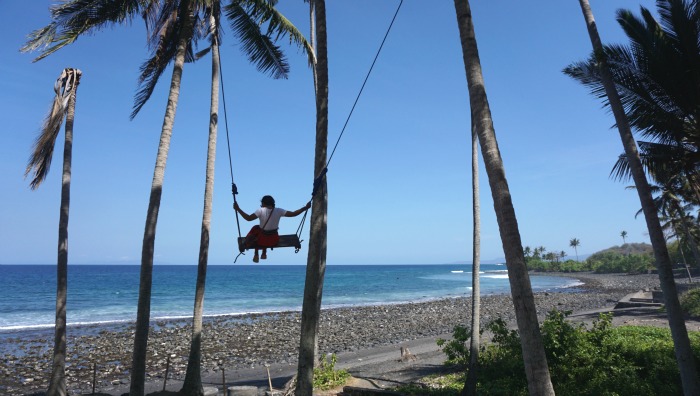 I love Bali, it’s such a beautiful island to explore and there is just so much to do. If you’re after a really special day trip, I’d definitely recommend a visit to Candidasa. Tirta Gangga is simply a ‘must do.’ The water palace is so beautiful, peaceful and relaxing, while Charlie’s Chocolate Factory is an enjoyable diversion (the buildings are just so funky and the beachside location is perfect).

What do you think? What would you recommend doing on a day trip to Candidasa? Let me know in the comments below. 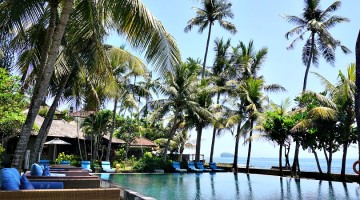