Heading to 2018: End of The Year Travel Plan

It is hard to believe that 2017 is coming to an end. In around 1 month we will be in 2018. I can still recall the beginning of August 2016 I departed on my very first long-term travel outside Indonesia. I returned to Indonesia at the end of May 2017. It was the longest time I have ever been outside Indonesia.

It was hard to describe the feeling that I had when I was on the plane from Addis Ababa, Ethiopia back to Jakarta. The transit officer in Dubai realized that I’d been travelling for a while when she checked my passport. She yelled out in excitement “Oh! You’ve been travelling for a long time and you are coming back home!” The word “home” and the excitement of a stranger totally added the sentiment. I nodded and smiled at her. I was being a bit teary-eyed as I waited for my flight from Dubai to Jakarta. 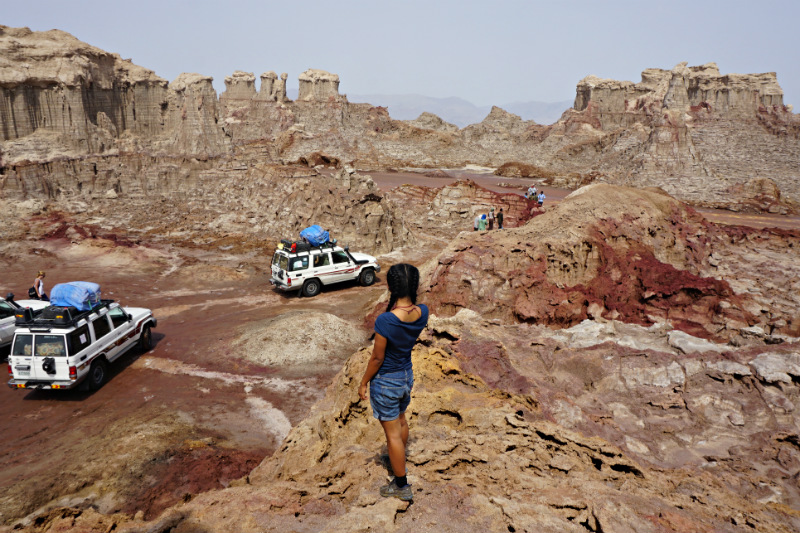 Exploring the Afar Region in Ethiopia

Since I was in senior high school travel has had a place in my heart, though it was only short distance travels (and of course the annual journey to my grandma’s village during Lebaran/Idul Fitri which involved crazy traffic). From 2006, I travelled more and further.

After travelling to several countries in Asia and Europe for a short time, I spent 3 – 4 years focused on travelling in Indonesia (while travelling occasionally to several countries in Southeast Asia). It is true that the more you travel the more you feel like you have not been anywhere. The list of places you want visit keeps on growing. On top of that, there are places that you would like to visit again and again.

Speaking of places that I want to visit multiple times in Indonesia; Bali, Flores and Lombok are on the top list. One thing that I really want to do is a week surf camp. Yeah I have tried learning how to surf before, but it ended badly. Probably it was not the right place to learn how to surf.

I tried to learn back in 2016 in Batu Bolong Beach, Bali. I spent 3 – 4 afternoons by the beach each week with around 30 minutes a day in the water with a surfboard. I managed to catch several waves, stood up for half second, 2 seconds, 3 seconds, or a bit more, but… one day I got stuck and was dragged out by the current! I remember I felt scared. I tried to paddle back to the beach, but had no power (as a result I got dragged out even more). Luckily, there was an Australian surfer who gave me a hand. Since then I have never really tried to surf again.

Last month, magically I got the confidence to be out in the water again by myself with a surfboard at the same place, Batu Bolong Beach, Bali. Obviously I didn’t catch any waves (well almost!), but it felt so good to be out again and feel comfortable on the waves. It was then I decided that I need to go somewhere for a week to learn (again) how to feel comfortable in the bouncy water and how to surf.

The end of the year is the right time to do thing(s) that you have wanted to do for a long time. First or second week of December I want to go, maybe, to Lombok to do some surf lessons. I remember the first time I tried to surf was at Selong Belanak Beach in the south of Lombok and it was great because it has a sandy bottom.

Given the fact that end of year there are a lot of people travelling and my small business can get somewhat busy. I get more inquiries at this time of year and this means less time for my own travel planning. I’ve just recently discovered one thing that can benefit people who want to plan their travels in a smart way. I promise it won’t consume a lot of your time.

I’ve been a user of the Traveloka app for a while, because it is so easy to use and the UI is great. The latest feature of Traveloka, that I find really useful, is the Price Alerts. With this feature, you get notifications on plane ticket within your budget (you can understand why I find this useful! I’ve tried it for my trip to Bali).

With the Price Alerts feature you can set the flight schedule (route and date), transit time (if any), notification alert (daily or weekly) and also your budget (this is optional). I’ve wanted to revisit Lombok for a while (good place to surf lessons) and it is great to receive a pop up notification on my phone about the ticket price. At the moment, I am putting on a price alert for flight from Jakarta to Lombok, with duration 6 days and travel date between 1st – 14th December. I set the budget as Rp 1,200,000 for round-trip. It is a lot better than manually check and comparing the price every day by yourself. Definitely saves you time and energy. 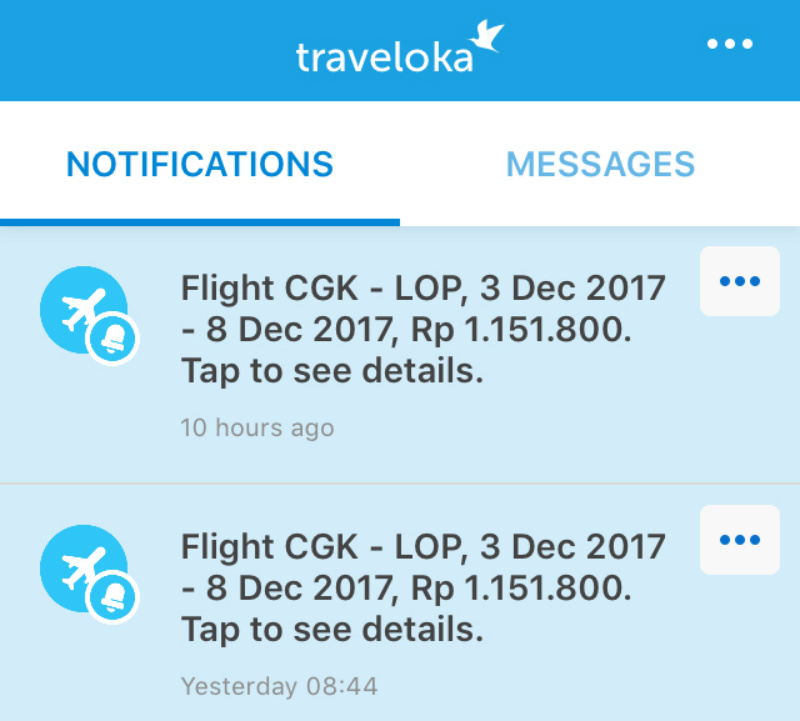 Notifications for Jakarta-Lombok roundtrip under my budget: Rp 1,200,000

Since I started travelling, a lot has changed. There are plenty of new technologies that make travelling a lot easier and also cheaper in a way (for example the Price Alerts feature from Traveloka that I mentioned above). On the other hand, travel hasn’t changed at all. It is still simply fulfilling. It makes you happy and excited in a strange way. It gives you strange warm feeling whenever you come back home.

I realize that when I travel, I pay attention and cherish the little things in life that I usually take for granted when I don’t travel. So December is coming soon, I hope you have travel plans for the end of year. Remember that your trip doesn’t needed to be miles away; it can be somewhere close to where you live. Let yourself have an adventure. A different experience out of the routine!

I’ve heard some of my good friends year-end travel plans. There are some people who always go to the destinations, for example go to Yogyakarta, Bali or Lombok. They sometimes even have the same holiday routines, like joining a yoga class, enjoying sunset by the beach or simply doing nothing. I know someone who will go to one of the most amazing destinations in Indonesia; Raja Ampat and celebrate the New Year there (I did the same thing in 2012). Another friend of mine will do a Southeast Asia backpacking trip mostly overland. How about you? What is your travel plan for the end of the year?