“It is the biggest volcanic lake in the world,” the guy said. “The island in the middle of the lake, Samosir Island, is as big as Singapore” he added.

Before the trip, I thought travelling to Lake Toba from Medan would be a piece of cake. A lot of people had told me “it’s a 4-hour drive from Medan.” The idea of staying one night in Medan and two nights on Lake Toba sounded perfect. It seemed like we’d get a decent amount of time to explore the area. After I visited I definitely had a different perspective.

The first thing is that two nights on Lake Toba just weren’t enough. To enjoy the area at an enjoyable pace and feel relaxed I think you should stay at least 3 nights. Second, the 4 hours drive from Medan is more like 4,5-5 hour drive from Medan. Then on top of that you have to add the 1-hour ferry journey from the mainland to Samosir.

It’s a long journey. You start getting what I meant? 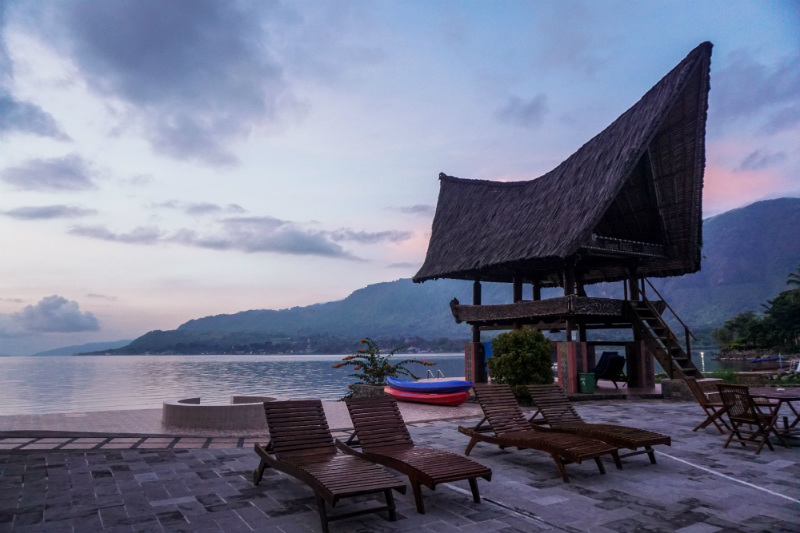 In the end our itinerary around Samosir Island felt quite rushed. If you don’t have much time to explore Samosir Island then you’ll need to do the same (it’s possible if a little tiring). Here’s a quick review of what we managed to do and what’s possible to do for a day on Samosir Island.

Our first (and only) proper day on Samosir Island started early. The first place we visited was Siallagan, a traditional village. According to the driver the people of Siallagan used to be cannibals back in the day. It was a 20-30 minutes drive from the rather confusingly named Tuk-Tuk (this is the tourist area in Samosir where you’ll probably end up staying, not the form of transport).

Around the village there were several houses, but the only one we could enter was the museum. Truthfully there was not much inside the house (I could see some Ulos fabric), but it was still interesting to see what the inside of the houses looked like. 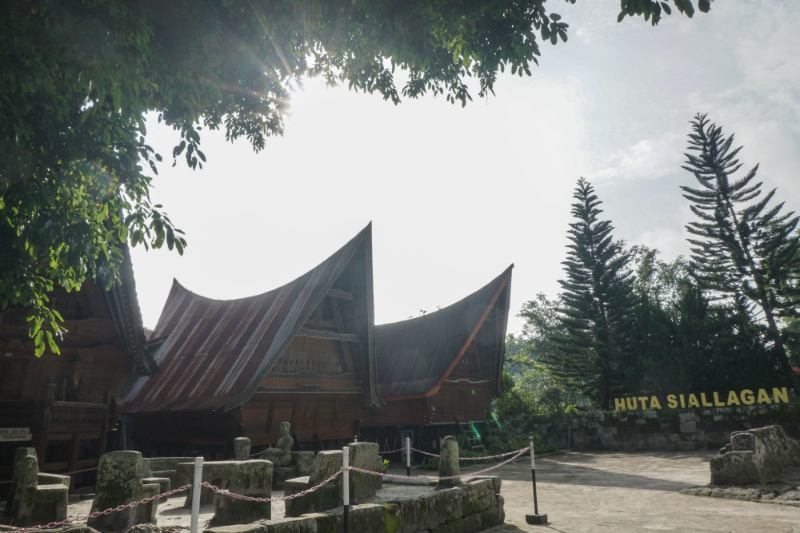 In the middle of the village there were several stone seats under a big tree. Once upon a time this was where the village court was held. Cases would be tried under the tree to decide whether people were guilty or not (violating customary law and so on). Separated from the central square was the execution area, which I quickly passed through.

Siallagan is one of several traditional villages scattered around Samosir Island. You can either visit one of them, like I did, or if you really into history you can check them all out. I am sure you’ll find unique and interesting about each of the villages. With our tight one-day itinerary on Samosir Island we didn’t have enough time to visit more of them. 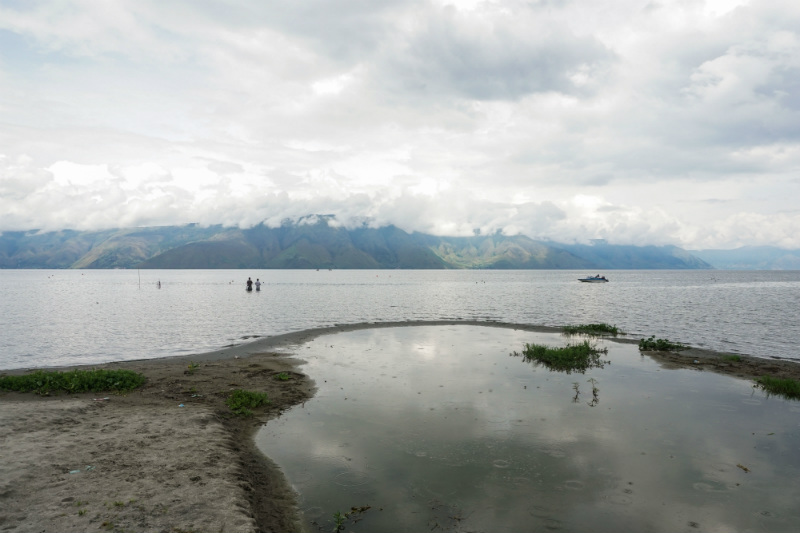 After exploring Siallagan we made a quick stop at one of the sandy beaches around Samosir. Pasir Putih Parbaba was surprisingly lovely. Standing on the beach it was easy to imagine that I could be somewhere on Bali. There were people playing by the beach, some doing watersports (like banana boat and other stuff), people enjoying a seafood barbeque (it smelled so nice) and some just chilling under the big umbrellas.

Pasir Putih Parbaba was a nice contrast to Siallagan. We didn’t spend much time here though and continued our one-day Samosir Island itinerary to Efrata Waterfall. The waterfall is not actually on Samosir Island though. 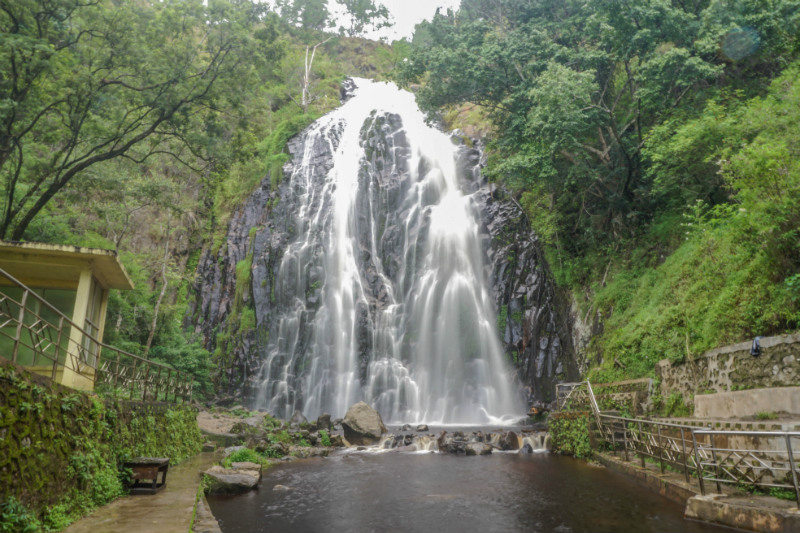 To reach the waterfall we had to cross the small bridge at Pangururan-Tele (you can do this without taking a ferry) from Samosir Island to the mainland. I love the fact that the waterfall was only a short walk from the parking lot. We got the privilege to enjoy the waterfall by ourselves. I ended up soaking wet, but I can never skip the chance to get close to a waterfall.

Visiting these three sites took a lot of time. The distances were large and we probably spent more time sitting in the car travelling between these different spots than we did at each site. So it was nice to be able to finally stretch my muscles and take a short trek around the Holbung Hills (Bukit Holbung).

The hills of Bukit Holbung are so beautiful and a perfect place to enjoy the scenery around Lake Toba. There are endless amount of beautiful sights to see. We were determined to climb to the top to see the view of Lake Toba from the other side of Bukit Holbung, however the day was too hot and we felt that we had walked enough. 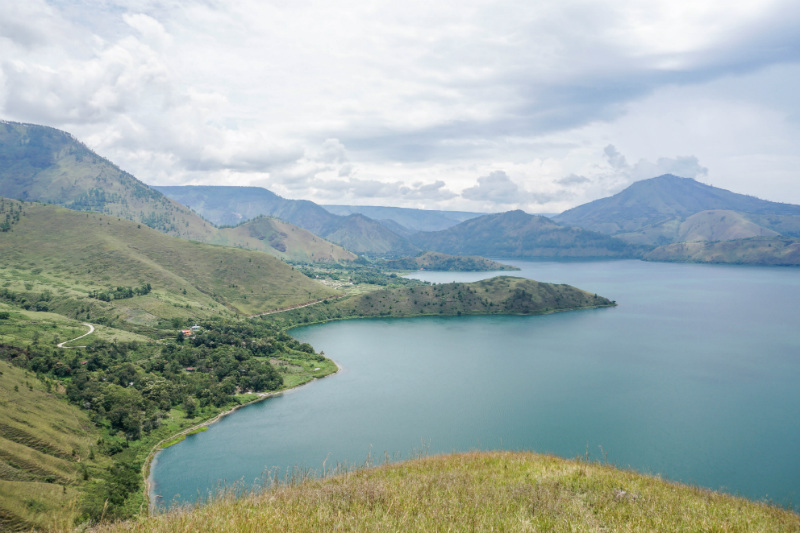 It’s unfortunate that some areas on the hills were covered in garbage. There were plastic bottles, snacks packaging, etc on the ground. Looking at the litter I think Bukit Holbung is a popular place to camp. I can imagine seeing sunrise, sunset or the Milky Way would be amazing from the hills, it’s just a shame people don’t tidy up after appreciating the nature.

After a bit of exploring we finally found the island (it wasn’t as amazing as our driver imagined). We also found a tiny-tiny island on the lake on the island 😀 I’d recommend avoiding this last stop. Lake Toba is more than enough. There’s no need to go on a mission to find a lake in Samosir Island.

On top off, the road conditions were not the best. I spent a good amount of time with my eyes closed and my fingers in my ears because of the sound of rocks scraping the underside of the car. It was so painful to hear! 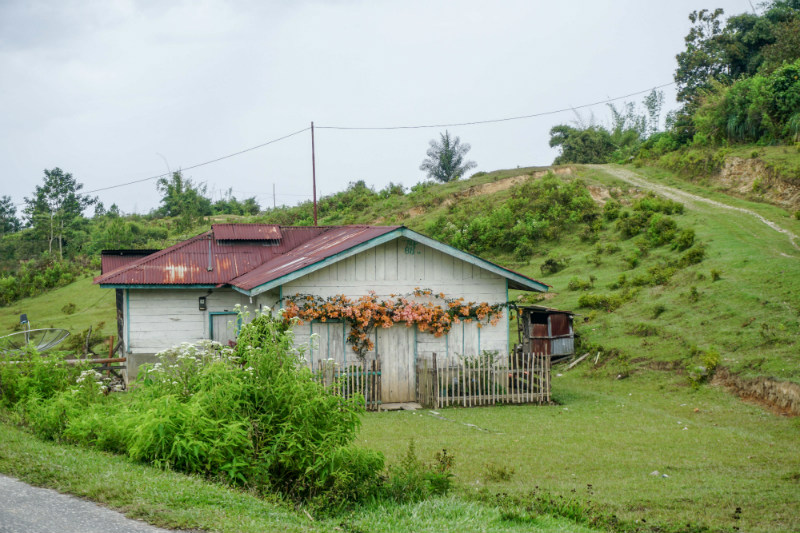 That was pretty much how we spent our day on and around Samosir Island. Early the next day we departed from Tuk-Tuk catching the first ferry back to the mainland. On the way back to Medan we stopped at the very popular coffee shop Kedai Kopi Kok Tong on Dr. Wahidin Road in Pematangsiantar. Their ice coffee was so good. The crowd was also lovely.

Thanks Medan and Lake Toba. It was indeed a short visit, but a truly memorable one. I will come back and spend more time exploring the area someday. Still, I’m glad I got to experience at least one-day exploring Samosir Island.

Next post Climbing Inerie in Flores: Should You Go? 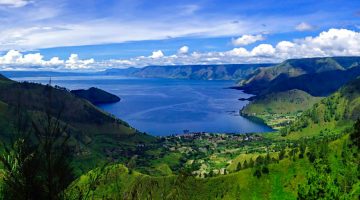 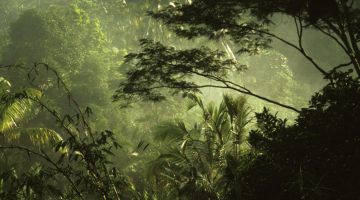 10 Crazy and Adventurous Things to do at Lake Toba 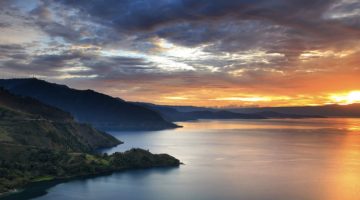