Candi Sukuh and Candi Cetho: An Alternative to Borobudur and Prambanan

Solo is a great city, but we wanted to do a day trip, do something a bit different. Candi Sukuh and Candi Setho, seemed like a good option. Btw, Candi is Indonesian word for temple. It would mean the chance to escape the heat of the city and see the countryside. The two temples are only a few hours drive out of the city, tucked away in the highlands of Java.

We set off to the temples in the early morning. We took the back roads through small villages and along winding roads. The drive was easy going and the roads were mostly empty, rising steadily ever upwards.

As we got higher the rice fields vanished, replaced by steep valleys topped by tea plantations. The temperature was cool and fresh. The tropical heat of lowland Java felt a world away.

As the car took another tight turn, revealing yet another spectacular view, we slowed down. We had arrived at the first temple, Candi Sukuh. From the entrance there was not much to see, but I was looking forward to exploring the temple. 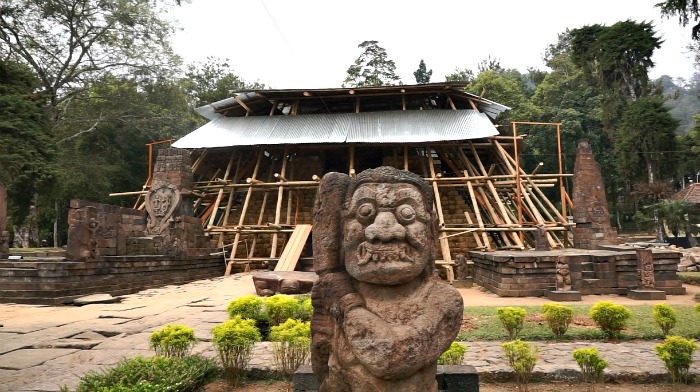 Outside of Solo, you rarely hear people talk about Candi Sukuh. It is a Hindu temple complex built in the late 15th century. The main feature of the temple is a squat stone pyramid built in the center of the temple grounds. It was one of the last large Hindu temples built on Java. But, that’s not really why it’s famous…

Reminiscent of images from the Kama Sutra, Candi Sukuh feels a world away from the reserved image of Javanese culture that most people are used to. Though, I have to be honest, it was the views rather than the carvings that immediately caught my attention.

Candi Sukuh is at an elevation of more than 900 meters, and from the entrance of the temple you get an amazing view over the valley spread out below. It’s an impressive location and I spent the first few minutes simply staring out over the countryside, before moving into the grounds. 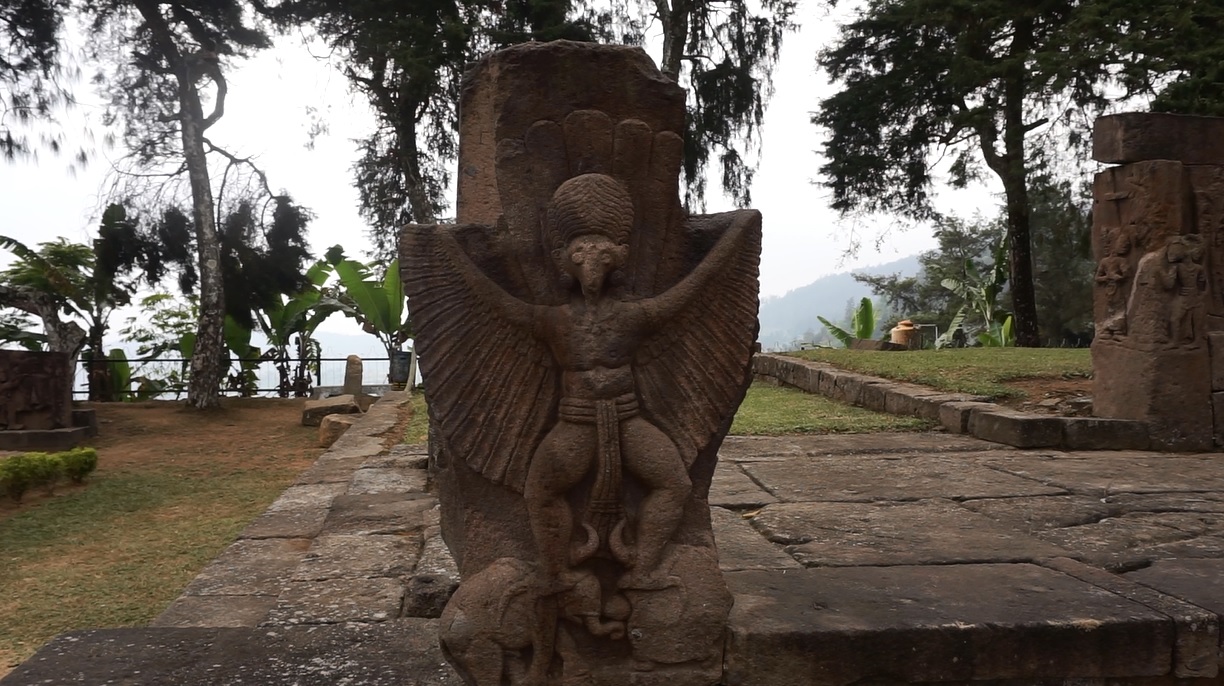 It doesn’t take very long to explore Candi Sukuh. The temple complex is quite small and most of it lies in ruins. At the entrance to the grounds are the ruins of the Western Gate, an old entrance building. There’s not much to see, just a few weathered carvings and a pile of stones.

We passed by the entrance and walked through the gardens to the main pyramid complex. The grounds were tidy and well managed, but the main pyramid was under renovation when we arrived. Large sheets of metal protected the roof of the pyramid and workers tapped away with hammers, creating a sound like cicadas.

After a quick walk around the pyramid, we left the temple complex. I’d been told it was possible to walk from Candi Sukuh to Candi Cetho and was interested to learn more about the walk. When I asked the driver though, he just laughed and shook his head saying, ‘you must be crazy to try it.’

It was a 15-minute drive from Candi Sukuh to Candi Cetho. The temple was located at the top of the adjoining valley, on the steep slopes of Mount Lawu. I could understand why the driver had thought it was a crazy idea to hike between the temples. Though the countryside was beautiful, it would have taken at least half a day to hike there. 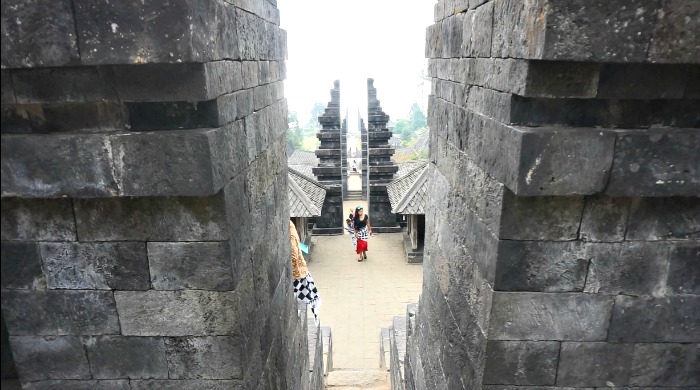 Candi Cetho or Candi Ceto, depending on how you want to spell it, is a Hindu temple dating from the 15th century. The architecture is completely different from Candi Sukuh. The temple grounds stretch for hundreds of meters up the slope of the Mount Lawu. The temple grounds are split into sections. Each section of the temple is walled off and separated by a steep set of steps.

The only thing that you can see from the entrance to Candi Cetho is the large gateway. It looks like it has been transported from Bali. In fact the whole temple complex shares the same architectural style as the temples you would find in Bali.

Immediately after climbing the steep steps to enter the temple grounds you arrive at a large garden that stretches for 50 meters or more. At the far end of the garden are two squat buildings and a courtyard, with a set of steps built into the wall leading to the next section.

The final sections of the temple grounds are closed off, with small shrines to the right and left at every turn. You can see what I mean about the temple in the video above. After climbing the final set of stairs we found shrines with smoking incense. We stayed for a few minutes, before turning around and taking a path to the left that goes past several food stalls, before winding up to the top of the hill.

We followed the path through the trees. At the top of the hill we found a large golden statue of a Hindu god. We took our shoes off and walked around the statue. To the right of the fountain we found a small building with a spring inside. There were small buckets and more burning sticks of incense. We put our hands in the cold water, washed our faces and headed back down the slope. 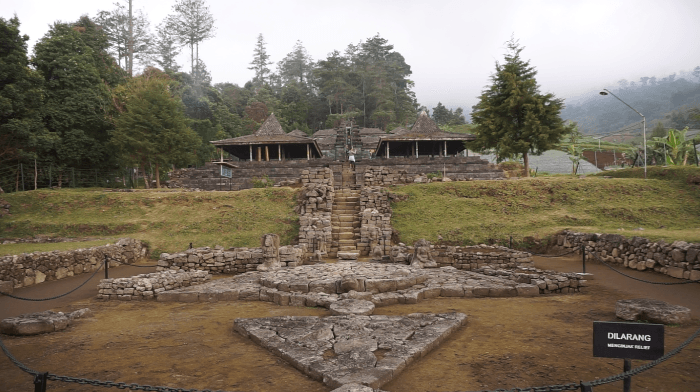 I really liked visiting Candi Sukuh and Candi Cetho. It’s easy to do both temples in a day and it’s really nice to just get out of the city and be surrounded by countryside. Moreover, the entrance costs to the temples are a fraction of what you will pay to visit Borobudur and Prambanan (it’s like USD $5 for both temples instead of USD $50).

If you have the time and you’re in Solo I’d definitely recommend a day trip to the temples. Candi Cetho is really special, and if it was in Bali and not Solo, would be a very popular destination. Luckily it’s not, which means you don’t get the usual crowds at the temples.If you’re interested in visiting the temples for yourself I can help arrange everything for you. Arrange a car hire to find out more.

What do you think? Have you visited Candi Sukuh and Candi Cetho? Were you crazy enough to do the walk between the temples? Let me know about your experiences in the comments below.